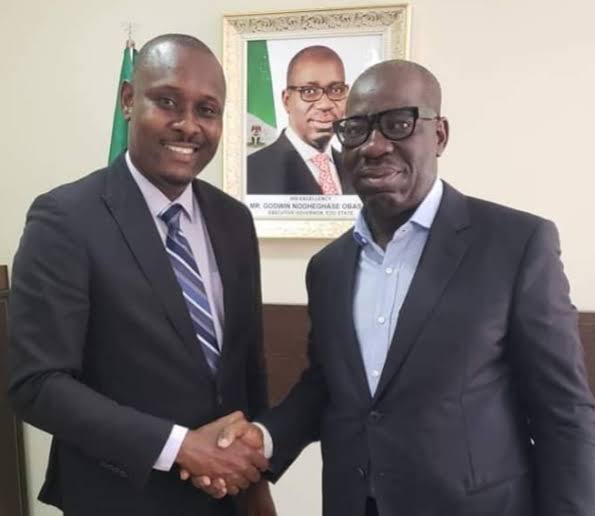 A group under the aegis of Coalition of Benin Youth Groups, has asked Governor Godwin Obaseki of Edo State remove Barr. Andrew Emwanta as Commissioner for Information and Orientation.

The group, in a statement issued and signed by Osaghae Collins Amadin and Eghosa Curtis Ugbo, President of the National Union of Edo South Youth and President of Benin Solidarity Movement (BSM) Worldwide respectively, alleged that the Commissioner has no respect and love for the Benin people and the Benin Traditional Council.

The statement alleged that Emwanta openly opposed the appointment of a Benin man as Chairman of Niger Delta Development Commission Board “even after the Senate confirmed Dr. Pius Odubu (a Benin son) and others.”

They also accused him of saying that he owes no one loyalty, not even the Benin Monarch, but only Governor Godwin Obaseki.

“Andrew Adaze Emwanta cannot be our Commissioner as this will be seen as an attempt by Edo State Government to undermine the people of Benin Kingdom.

“We, the Benin youths, reject Andrew Adaze Emwanta and will be forced to staging a five thousand Edo youth protest which may last for one full week.

“Andrew Adaze Emwanta must go on his knees before Oba Ewuare II and retract all that he said during the struggle of the return of the artefacts. We also doubt his said loyalty to the Governor as we are very sure when another government comes in, he will also change his said loyalty.”

He said: Don’t bother yourself, the person behind them was arrested by the AIG Zone 5, for criminal-related activities. The issues they are raising for which the Governor appointed me, namely, they said I’m loyal to the Governor, but is that an offense? They said Odubu is from Edo. It’s the turn of Delta which the Governor is aware of.

“When I was going through the process of screening, did they not know? The thing was everywhere these are the people who are paid, so you don’t just bother yourself about them.”