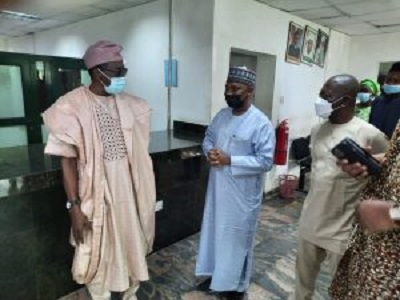 The Senate Committee on Trade and Investment has commended Alhaji Garba Abubakar, the Registrar General of the Corporate Affairs Commission (CAC) for introducing reforms in the commission.

Sen. Francis Fadaunsi, Chairman of the Committee, gave the commendation when he led other members on an oversight visit to the CAC office in Kano.

Mr Rasheed Mahe, Head Media Unit of the commission said this in a statement in Abuja on Tuesday.

Mahe said that Fadahunsi expressed delight at the commission’s use of technology to drive its processes.

He added that the use of technology was crucial to the success of CAC, and enjoined the Registrar General to ensure continued improvement in the commission’s processes.

He pledged continued support to the commission to enable it deliver on its mandate.

Earlier, Abubakar highlighted some of the reforms initiated under his leadership.

“The commission which is 30 years old, started its digitalisation in 2004 with electronic workflows, but there was no update for over 10 years.

“However, we are almost achieving full digitalization at present,” he said.

Abubakar reiterated the commission’s commitment to ensuring that it competed with its global peers as well as deliver seamless services to customers both within and outside the country.