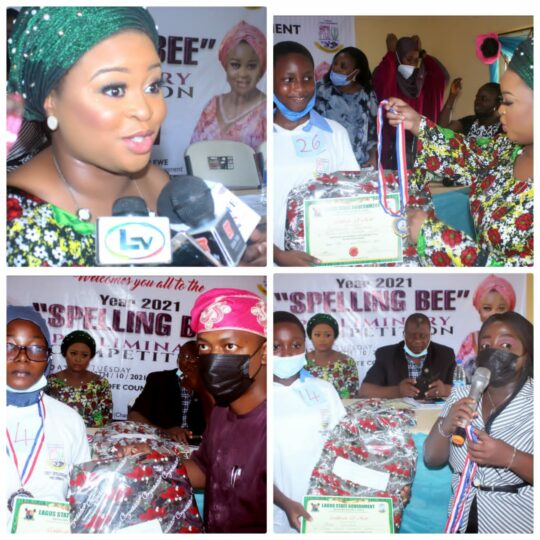 Kosofe Local Government has gifted educational materials to hundreds of students at the 2021 Spelling Bee competition held at the council Secretariat on Tuesday.

Ogunlewe, the wife of the Council Chairman in her opening remarks, said that the spelling bee was an academic competition between the primary and secondary school students in the local government.

According to her, the competition is the brainchild and pet project of Senator Oluremi Tinubu.

She said: “The former first lady introduced this competition in order to boost the reasoning and improve the spelling abilities of pupils in primary and students in secondary schools in the state.

“Research has shown that this competition has helped boost morale, confidence, public speaking and improves the pupil’s general knowledge and proficiency of the English language.”

Ogunlewe said that Governor Babajide Sanwo-Olu of Lagos State in his agenda has placed the competition on a high pedestal.

She advised the pupils to be hardworking, saying that was the key that unlock the gates to success.

“I must continue to emphasize that education and hard work is the key that unlocks the gates to success and when you add good morals, integrity, and respectable character you are sure to go far in life.

“To the parents, guardians, and teachers, pls I employ you to continue your good work of imparting knowledge and continuously encouraging the pupils in their academics and extracurricular activities,” she said.

According to her, it is important that we do not underestimate the value and role that encouragement and positive affirmation play in nurturing and developing the minds and abilities of pupils.

She added that the students were the future and they needed to be well taught in both academics and good morals.

Adetomiwa Christiana, a student of Senior High School Maryland Lagos, who came first in the competition thanked the local government for the competition and the gift materials.

“I thanked the local government for given us the opportunity to showcase our abilities in this competition and the gift items presented to us,” she said.

Ebi Jessica, a Pupil from the Anglican Primary School Ogudu, who came first at the primary school level also thanked the organizers for the kind gestures.

However, hundreds of students of various schools within the local government were given school bags, writing materials, mathematical sets, and other school items.