He is Deadwood: APGA speaks on Nkem Okeke who joined APC 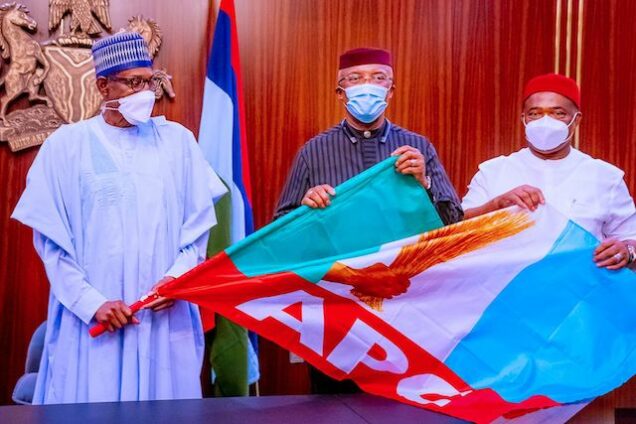 Okeke was formally presented to President Muhammadu Buhari by Gov. Hope Uzodimma of Imo and Governor Mai Mala Buni at the State House, Abuja on Wednesday.

In a statement issued in Awka by Mr Tex Okechukwu, APGA National Publicity Secretary, the party said the defection was long expected.

According to APGA, the deputy governor had thought that the governor and the party were going to hand over the governorship ticket of the party to him on a platter.

“When that didn’t happen, he started behaving abnormally, even to the point of insubordination and dereliction of duties,” it claimed.

APGA said the deputy governor left the party without formally notifying the party or the state governor, adding that the move was uncalled for, ill-timed and ill-advised.

According to the statement, the governor had always treated his deputy with respect, love and consideration.

APGA called on party members to remain united and ensure victory in the Nov. 6 governorship election.

It called on Gov. Willie Obiano not to be distracted by the defection of his deputy, which it claimed was a ploy to create a semblance of disunity in his government.

“Let nobody be deceived, APC has no root anywhere in Anambra and that is why all that they do is going about luring political deadwood with money and other lucres.

“No matter the designs of the opposition and other subterranean forces, APGA is poised to win the forthcoming election and continue with the massive infrastructural development going on in the state.”

Governor Hope Uzodinma who briefed State House correspondents after the new APC member was presented to the President said there will be more defections to the APC before the November 6 governorship election.

The governor faulted that claims by APGA and Governor Willie Obiano that members of the State House of Assembly who defected from the All Progressives Grand Alliance (APGA) were financially induced to join the APC.

He said on the contrary, the defectors were lobbied through persuasion and counselling.