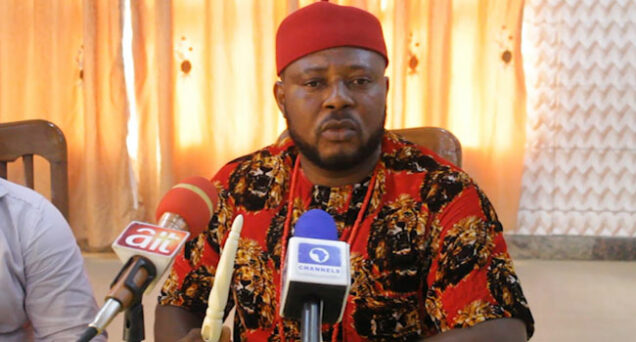 The Ohanaeze Ndigbo Youth Council Worldwide, OYC, has called on youths to de-escalate tension in the South-East region for one month.

The region has been experiencing heightened insecurity and restiveness after Nnamdi Kanu, the leader of the Indigenous People of Biafra, IPOB, was re-arrested.

Recently, the National Assembly caucus from the zone, led by Senator Ike Ekweremadu announced that they were employing a political solution towards securing Kanu’s release.

However, in a statement issued Wednesday and signed by the OYC President-General, Mazi Okwu Nnabuike, he called for a one-month ceasefire by the restive youths.

He said in the statement that “it is just proper that at this juncture, the NASS caucus and two governors who are making moves to secure Nnamdi Kanu’s freedom, be given a chance.

“This is not the first time Chief Senator Ike Ekweremadu-led NASS caucus will be playing this role; they did it in the past and it was fruitful. So, we advocate that they be given the benefit of the doubt.

“To this end, we appeal that every form of restiveness should cease henceforth till a period of one month, within which we expect to see visible progress towards the release of Mazi Nnamdi Kanu.”

Okwu equally urged the Federal Government to ensure that the pro-Biafra leader was produced in court on October 21, 2021.

He noted that “there have been these claims that the Federal Government is delighted over the insecurity in the South-East. We don’t want to believe such an assertion.

“However, they should disprove it by ensuring that Nnamdi is produced in court on the 21st of this month.

“Anything to the contrary would mean adding fuel to the already ignited fire but we are not praying for that.

“If the FG actually wants peace in the South-East, let them release Nnamdi Kanu.

“Anyone interested in peace in the zone should think of Kanu’s release, not sending military; brutal force has never solved any problem, rather dialogue.”

The Youth group, however, did not spare the South-East leaders over their silence on Mazi Nnamdi Kanu’s case in the communiqué they issued after their meeting in Enugu last week.

“We were disappointed that he was not mentioned in the communiqué, rather they were talking about stopping sit-at-home, even when they don’t have the power,” he said.