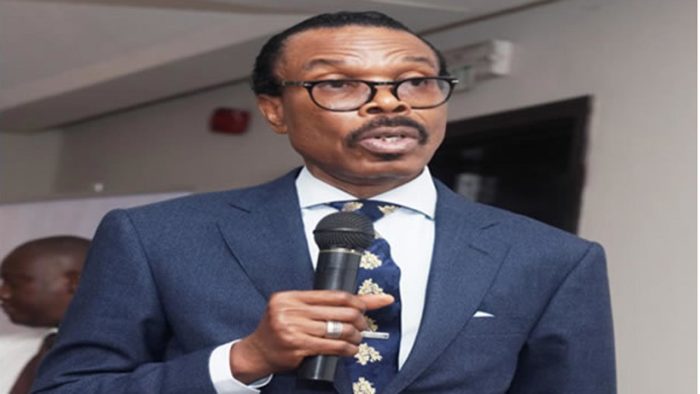 According to Rewane, who was a guest on Channels TV Politics Today on Tuesday, the naira should be four times stronger than what it is today but for a number of factors which he said were also responsible for the weak economy.

He also supported President Muhammadu Buhari’s decision to back VP Osinbajo’s call for synergy between the fiscal and monetary policy makers, stressing that they have the same goal but different approach.

The presenter, Seun Okinbaloye quizzed Rewane to breakdown in layman terms what the VP was explaining during Day 1 of the Mid-Term Ministerial Performance Review Retreat in the State House, Abuja, noting that, a lot of people seem to have criticized the VP’s position on the value of the naira and how to fix it.

Rewane said, “First and foremost, let me be clear that what the Vice President (Osinbajo) said was absolutely correct. In the sense that, no currency which is managed at a fixed rate basis will ever find fair value. To that extent what does it mean that the currency has market value and what is called official value but in reality, the question we have to ask ourselves like the President just said that the goal is to build a resilient and strong economy. Some people mistake a strong currency for a strong economy, no.

He added that, “So let us go back to what it is, an overvalued exchange rate is no use to the policy makers, regulators and the market, so what are we looking for, we are looking for convergence. So what the Central Bank is doing is that it is trying to manage the exchange rate as best as it could, based on the limited resources but on the other hand there is excessive demand for dollars driven by so many factors and economic growth, speculation, fear and panic.”

He then highlighted why the Nigerian economy was weak and the factors responsible for it. “So where do we get some kind of alignment, such as a currency that is overvalued, is it transitory or is it structural. What you must note is that the Nigerian economy ran into difficulty, the event of the difficulty being the pandemic but the cause of the problem was pre-existing before coronavirus. Out of that pre-existing condition was an overvalued exchange rate, subsidies in the petroleum system and price elasticity.

Rewane then proffered a solution to Nigeria’s tethering problem. “To bring this factor prices into what we call a general equilibrium status is what we require. Let us take the factors that lead to currency valuation in the first place. There are about five factors; the balance of trade; the level of external reserve; the level of inflation; the level of interest rate and the general level of productivity in the economy.

“If you look at all these factors, the Nigerian naira should be getting stronger because during the COVID period the price of oil dropped as low as $28 per barrel, today it is $82/$83 a barrel, therefore, the currency, just arithmetically speaking, the currency should be four times stronger than what it is. Why is it not reflecting that value? Because the actions of policy makers at times are sending mixed signals.

“In other words, you are trying to allocate resources ad finem allocate a solution to a market problem. The way to deal with the market problem is to allow the invisible hand, which is the supply and the demand to determine it and then you intervene occasionally to bring stability to it. There is no difference between the goal which the Vice President espoused and the goal which the Central Bank is trying to practice.

“The path to achieving general equilibrium and near effective exchange rate for the economy which brings about fiscal neutrality is one of either manage it by fiat or manage it by a process that is transparent and that does not subject itself to whims and caprices of corruption. I think that is the truth. Quite frankly, I don’t see any divergence in objective and I don’t see divergence in strategy.

He explained that, “If you look at about 190 countries in the world, I think about 170 of them actually have managed floating rate convertible currencies, so Nigeria cannot be an out player, Nigeria has to do that which is necessary because, let’s face it because for three to four years the difference between a parallel market and the official market was only three or four naira, less than one or two percent but once distortion started coming in, look at the expansion, the difference is N165, so this makes the country into what we call a speculators paradise and that is what is happening right now.”