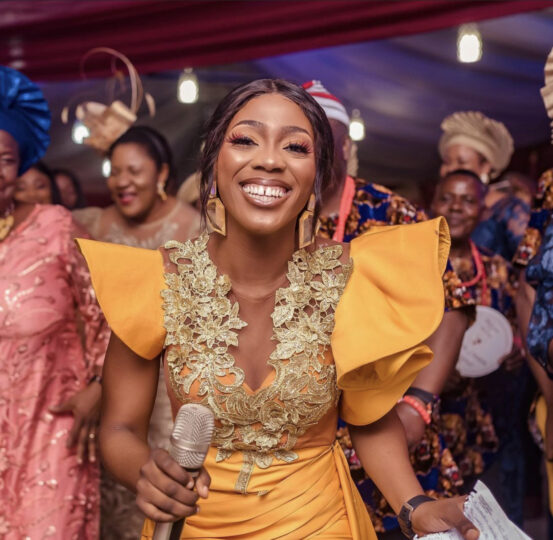 The compère famously called The Energy Goddess, and her boyfriend were said to be driving along the Lekki-Epe Expressway in Lagos on Tuesday when the accident took place.

It was gathered that the event host sustained injuries during the car crash and was rushed to a nearby private hospital where she eventually died.

The boyfriend, who was driving, was unhurt.

She had worked with various Nigerian celebrities including Funke Akindele’s Scene One Production and Mercy Aigbe.

MC Eve began her media journey as an undergraduate at Ekiti State University, Ado Ekiti where she studied English.

During the period she co-hosted a weekly show “Trending” on Ekiti State Television (EKTV) alongside Adesalu Adesola.

“We were co-presenters in the trying days. She used the platform to get trained. She was full of life and positive vibes. She handled the gist section the most because it’s her strength then. We departed just because she graduated from school and needed to go back to Lagos,” Adeola told PM News.

However, celebrities and colleagues have taken to social media platforms to pay their last respect to the deceased as news of her death continues to spread.

In a touching tribute on Thursday, Toyin Lawani, the fashion entrepreneur, described MC Eve as “a young super talented” lady. She added that her “heart is heavy” over her death.

The entrepreneur also recounted how she contracted the deceased and Kenny Blaq, Nigerian comedian, to be the host of her wedding to Segun Wealth in June.

“This was the video of @hostedbyeve I saw that got me attracted to her, she was such a natural gem. No way she will be at your party and you all won’t dance, Rest on Eve, love you, my heart is heavy,” she wrote on Instagram.

“This a young super talented life cut short, can’t believe I’m typing this tribute about @hostedbyeve. She called me a few weeks ago, was crying, and thanking me for giving her the biggest break in her career.

“She said she started getting bigger jobs since I let her host my wedding @theartistandhismuse21 alongside with @kennyblaqmcfr_ something I did without thinking twice about it.

“How did this happen, @itshelenpaul who is my usual host for all my events was abroad and we were scouting around for another mc that can fill her shoes.

“A blog posted @hostedbyeve hosting an event where she was making an old woman dance and I fell in love with her, few of my friends wanted me to use someone with a bigger name as usual and I said no I like this girl.

“I had my planner reach her and book her anonymously, then we had her come to my empire for fittings for her dress for the day, when she came, she was super happy to find out the kind of job she was paid for.

“Even on the day she blended with @kennyblaqmcfr_ like hey had known for ages, you should see this small queen in action, no matter your mood, you must dance and laugh when she’s on the mic.

“Eve rest on my love, in the little time you were on earth you really shook it and made your mark. Glad to have been part of your journey, you shall never be forgotten to fly with the angels. Rest in peace.”