FG to collaborate with professional bodies for capacity development 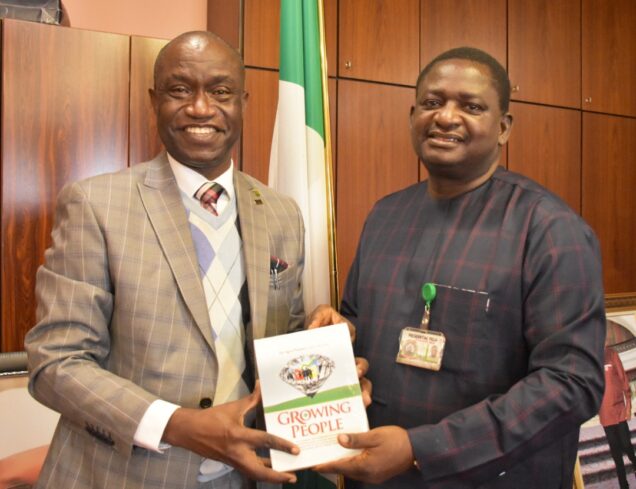 Special Adviser to the President on Media and Publicity, Femi Adesina receiving a publication of CIPM from its President Olusegun Mojeed.

President Muhammadu Buhari’s federal government-led administration is ready to collaborate with well-established bodies and professionals to enhance capacity building in the area of service delivery.

Special Adviser to the President on Media and Publicity, Femi Adesina disclosed this when he received members of the Chartered Institute of Personnel Management of Nigeria (CIPM) led by its President, Mr. Olusegun Mojeed in State House, Abuja.

Mr Adesina said, “I am very delighted about your offer to partner with this administration in the area of Capacity Development.”

Adeshina also said the President had directed all Ministers and Permanent Secretaries to promote a robust performance culture in their areas of jurisdiction at the just-concluded two-day Mid-term Ministerial Performance Review Retreat.

He added that “the President had equally directed the Head of Service to, urgently, invest in strengthening the capacity of the MDAs in order to achieve government’s set targets on human and infrastructure development.”

Earlier, the CIPM President, who was accompanied by members of the Executive Council, had expressed the willingness of the Institute to collaborate with the Federal Government on human capacity development.

He commended the Administration of President Muhammadu Buhari for on-going work on the Bodo-Bonny road, saying residents of Niger Delta region and other road users in the area have started using the accessible part of the road, thereby easing their travel burden.

Mr Mojeed also commended the administration for approving a 14-day paternity leave for men in the Federal Civil Service, noting that it was gratifying that Nigeria has keyed into global best practices on the welfare of working class men.

The CIPM President was accompanied on the visit by Messrs Henry Unakpor (Vice President), Shola Oshunkeye, and Dr Adetayo Haastrup.