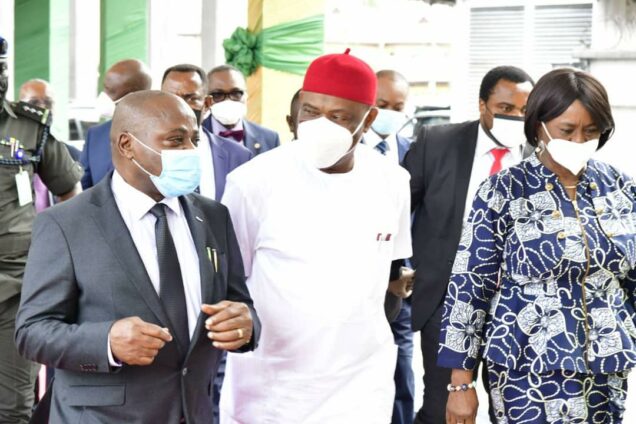 Governor of Rivers, Nyesom Wike, has inaugurated the State’s Multi-door Courthouse that will offer alternative resolution to litigations bothering on trade deals and social relationships.

The inauguration held at the Rivers State High Court Complex in Port Harcourt on Thursday.

Wike said establishment of the Multi-door Courthouse is a further demonstration of his administration’s commitment to put in place a comprehensive judicial system that would serve the dispute resolution needs of businesses and investments in the State, as well as parties from other States that may be willing to submit to its jurisdiction.

The governor maintained that the Multi-door Courthouse system will further expand the doors and frontiers of effective justice delivery to the people with players in the business and investment community as the greatest beneficiaries.

“Rivers State cannot but join the expanding jurisdictions across the world where the Multi-Door Courthouse system is becoming part of the dominant alternative to litigation and arbitration in the resolution of commercial disputes, including, even relationship conflicts.

Wike explained that the commitment of his administration to sustain the ongoing infrastructural transformation of the State has continued to attract more trade deals and investments into the State, while some existing companies are expanding their operations.

Wike added that expansion in business operations has naturally and inevitably, caused an increase in commercial and investment disputes that would require speedy, cost effective and mutually mediated and accepted resolutions in the State.

“This is more so, when businesses cannot continue to burden their book balances with huge litigation costs in the midst of declining revenues and profit margins occasioned by the downturns in our national economy.

“Furthermore, apart from being faster in relation to litigation, one of the profound advantages of mediation is that it preserves commercial relationships after the conflict, which is what every businessman or woman needs.”

He added that there is therefore the need to sensitize the business community about Multi-door-Courthouse and what they stand to gain from its services.

The Governor also informed that two weeks after the State Executive Council approved the construction of a new magistrate court complex for the State as part of plans to de-congest the State High Court premises, the contractor for the project has been mobilized and construction work begun.

“When completed, this complex will accommodate all the magistrate courts presently domiciled in the State High Court complex and free-up spaces to accommodate more High courtrooms and expand access to judicial services for our citizens.”

The governor asserted that his administration has deliberately prioritised the welfare and comfort of judicial officers and magistrates in the state.

He said a law has been assented to make it a policy to provide status houses for every judicial officer of Rivers State origin, irrespective of the jurisdiction under which you are serving, whether Rivers State, Federal judiciary, or the judiciary of any other State of the federation.

Justice Amadi emphasised the core objectives of the Rivers State Multi-door Courthouse, as provided in section 2 of the law to include the following;

“Enhance access to justice by providing alternative mechanism to supplement litigation in the resolution of disputes, minimise frustrations and delay in the justice delivery system by providing a standard legal framework for fair and efficient settlement of disputes through alternative Dispute Resolution (ADR).

Rivers State Attorney General and Commissioner for Justice, Prof. Zacchaeus Adangor said it is a dawn of new era for Rivers State as it joins the league of over 15 other states of the federation to commence the operation of a Multi-door Courthouse.

According to him, it is a court connected mechanism that will promote alternative peaceful resolution of dispute.

“There is no gain saying the fact that access to justice is a constitutional rights and that the core elements of that right include speedy, efficient, cost effective administration of justice.”

The leader, Body of Senior Advocates of Nigeria, Rivers State and former Nigerian Bar Association (NBA) President, Onueze Okocha, SAN, said the core reason for the establishment of the Multi-door- Courthouse system is for the speedy delivery of justice and access to justice.

The highlight of the event is the designation of Governor Wike as a fellow of the International Dispute Resolution Institute by Professor C. J. Amasike.