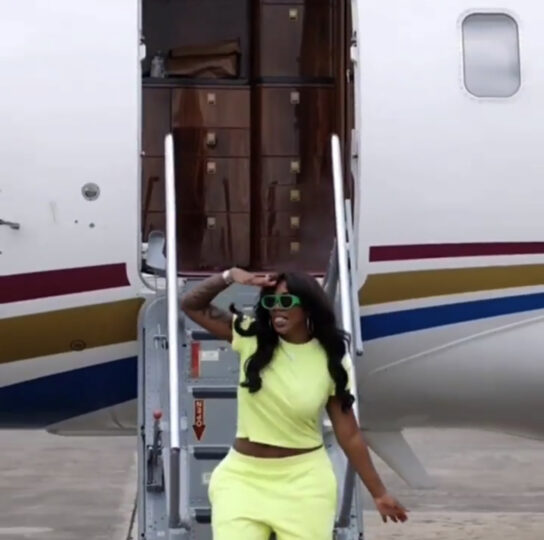 Award-winning singer, Tiwa Savage, has landed in Nigeria amid her alleged sex tape controversy, which sent social media into a frenzy.

The diva and mother of one who was in the United States when the video broke, said the leak was an attempt to blackmail her with a sex tape she had made with someone she claimed to be dating right now.

Savage, who spoke in a Power 105.1, New York radio interview, then talked about her determination not to indulge the blackmailer.

However, an old sex tape of her lookalike has also made its way to the internet after her interview, while some accused the singer of a publicity stunt.

But she has not reacted to the new development.

The singer, who is currently promoting Somebody’s Son, a song off her EP, ‘Water and Garri’ featuring American singer Brandy returned to Nigeria after giving updates about her postponed US tour.

“Back in the UAR and see y’all killing these moves already 😎,” she caption a video of her arrival the airport.

According to the songstress, her music tour which was scheduled to hold this year, has been postponed till next year because of her father’s death.

The sonorous singer announced the death of her father, on the 19th of July, 2021.

In a star-studded elaborate ceremony on September 3 2021, the singer buried her father in Lagos, shortly after the release of her Extended Play project.