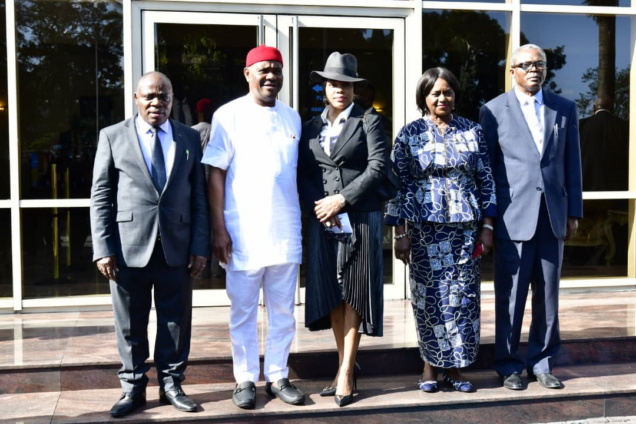 Governor Nyesom Wike of Rivers has accused the National Judicial Council (NJC) of appointing lawyers who lack the capacity to be bold and courageous in the discharge of their judicial functions as judges.

Wike spoke during the swearing in of Justice Ihenacho Wilfred Obuzor as the Acting President of the Rivers State Customary Court of Appeal at the Government House, Port Harcourt on Thursday.

He said such Lilly-livered judges have molded the judiciary into an institution that is not living up to its responsibility of dispensing justice according to law.

Wike maintained that a judge who is bothered about who will be offended by his ruling or afford to be accused should not have been appointed in the first place because justice cannot be advanced in such manner.

“It is unfortunate that the judiciary is not living up to expectation. I should not be one of those who should be criticising it. But I am saying what is the reality.

“Any judge that does not have the mind and courage is not supposed to be a judge. So, NJC should consider, look at people, look at the judges, can they be courageous to do what is right ?

“It should not be just that this person is intelligent. A judge should be firm and give judgment the way the law says it should be.”

Wike assured that the Rivers State Government will not allow any courageous and bold judge in the State who is discharging his or her duties within the confines of the law to be blackmailed.

He said it is important for judges to dispense justice according to their conscience and the law and be comfortable that they upheld the law. According to him, one of the reasons the State is providing houses for judges of Rivers extraction is to safeguard them from corruption.

“People must do things according to law. But if you go outside the law and you’re punished, count me out. But if you’re within the law and anybody thinks that because he has people to punish you, Rivers State government will not agree to it.”

Governor Wike also stated that all capital entitlements captured in the 2021 budget of the state that is due to the judiciary has been released to it.

Governor Wike advised against divisions among judicial officers because it will weaken the strength of the judiciary.

He urged the new President of the Rivers State Customary Court of Appeal to leverage on the successes of his predecessor and work to make the court stronger in dispensing justice.

Wike expressed shock and sorrow on the death of the former President of Rivers State Customary Court of Appeal, late Justice Christiana Gabriel-Nwankwo.

The governor described Justice Gabriel-Nwankwo as one of the State’s distinguished jurists who used their knowledge and skills to advance justice delivery.