Buhari most popular Nigerian?: Why Adesina is trending 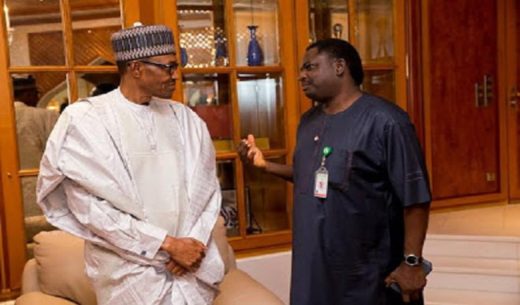 Femi Adesina, special adviser on media to President Buhari has capitalised on a statement by Vice President Yemi Osinbajo, that Buhari is ‘possibly’ the most popular Nigerian politician.

To Adesina, Buhari dwarfed all in popularity.

But significantly, he avoided comparing Buhari with Sardauna of Sokoto, Sir Ahmadu Bello, making critics assail him for a fallacious and incomplete comparison.

Read his controversial article titled: THE ESSENTIAL BUHARI: VP OSINBAJO GOT IT!

Vice President Yemi Osinbajo is an honest man. Whatever he tells you, please take it serious. You can even take it to the bank, as it’s a cheque that will never bounce.

Last weekend in London, while speaking with top officials of the Nigerian High Commission, VP Osinbajo said of President Muhammadu Buhari, the Mai Gaskiya (Honest Man): “The President is possibly the most popular Nigerian politician that we ever had in generations. He is possibly the only person, who can go into a place or somewhere without bossing people to gather and they will come and listen to him speak.

“We need that level of credibility to be able to solve problems in our country. And I think because of his level of credibility, despite everything, he is still the only one that can call everyone, and even people who do not necessarily agree with him know that he is a man of his words.”

There may be a tendency to say; what else do you expect a number 2 man to say of his principal? He won’t excoriate or flagellate him in public, and because he may possibly need his support for the number one position at a time in the future, so he would say sugary things.

For a typical politician, ambitious, cold, calculating, scheming, yes. But those of us who work with the duo know that Professor Yemi Osinbajo is not in that mould. He is honest, factual, totally dependent on God for whatever the future holds. Nothing is a matter of life and death, and so he could have chosen to keep quiet about the attributes of the President, so that he wouldn’t be misconstrued.

When he said Buhari was possibly Nigeria’s most popular politician that we have had in generations, I believe it, not just by the hearing of the ear, but because my eyes have seen it.

I am old enough to have seen our colorful and even swashbuckling politicians in action. I have seen the great Obafemi Awolowo. The charismatic Nnamdi Azikiwe (Zik of Africa). Shehu Shagari. Amino Kano. M.K.O Abiola. Bashir Tofa, and many others in action. But I have not seen anyone with the kind of attraction, magnetic pull, that Muhammadu Buhari has. And that is round the country, north and south. People swarm round him as bees do to honey.

I have been round the country with the President. I have also been to several countries of the world with him. I have not seen any other Nigerian leader, past or present, with his kind of allure, pull, fascination, magnetism. And that is why VP Osinbajo is right to have described him as possibly “the most popular Nigerian politician that we ever had in this generation.”

I remember that day in August 2017, when the President returned to the country finally from his medical vacation. From January of that year, he had been in and out a couple of times, but spending weeks and months outside, attending to his health. And finally on August 19, he returned home, triumphantly.

We were at the airport to receive him. I have told the story a number of times, to dispel the idiocy that it was a certain Jibril of Sudan that came back, and not Buhari. The daughter of the immediate past Chief of Defence Staff, Gen Gabriel Olonisakin, was getting married. And I had attended both the church service and reception, decked in full Yoruba traditional attire of Agbada and a cap to match. Straight from the ceremony, I went to the airport to join the welcome party for the President.

We the principal aides were on a line to receive the President as he descended from the aircraft. And he shook hands with each person, having one wisecrack or the other to say, as is typical of him. When he got to me, he said, “Adesina, this is the best I’ve seen you dressed.” And we both laughed.

Jibril of Sudan? How did he know I was Adesina? How would he know how I normally dressed? Idiocy, I say again. But that is just a digression, not the story I really want to tell to support the topic at hand.

We entered the vehicles lined up, and the convoy moved. It was perhaps the longest journey I’d ever witnessed from the airport to the town. Where did they come from? Like locusts, they swarmed onto the road, at many times forcing the convoy into a crawl. I didn’t know that such huge population resided in the communities along the airport road.

Not induced or procured in any way, the people trooped out in their thousands to welcome the President back home. Multitude of ordinary Nigerians, the ones bearing the brunt of whatever was happening in the country then. They came onto the roads, waving, cheering, heralding the man they loved back into the country. Many times, the convoy was forced to a dead slow, until the President had to wave at them, and they cheered uproariously.

It took double or triple the normal time, before we could get to the Presidential Villa.

When about a year later, those who thought they owned the country told the President pontifically to dismount from the horse, and not run for a second term in office, I thought they were overreaching themselves. And so it was. The President ran in 2019, and he won, even with wider margin than he did in 2015, when he had knocked a ruling party off its perch.

So, when Professor Osinbajo says we possibly have the most colorful, popular politician with us, it is by no means patronizing. Even now, with all the challenges in the country, let President Buhari make a public appearance anywhere, he is still happily received, against the conjecture of naysayers and evil hearts, who conjure unrealistic things.

Now, having such a leader in our country, one who wants nothing for himself, and is only actuated by touching the lives of the people positively, how should we utilize him? Give maximum support, and help him to realize his vision, not virulent opposition as we see from certain untutored quarters. It is in our collective interest to support such a man for the glory and benefit of our country.

VP Osinbajo said only Buhari has the credibility to be able to solve some problems in our country now. Yes, he’s the one the populace chose, voted into power, despite all odds. Hear the VP: “And I think because of his level of credibility, despite everything, he is still the only one that can call everyone, and even people who do not necessarily agree with him know that he is a man of his words.”

Very true. This is our President, a man out to serve, and not to be served. The virulent opposition we see in the land can only be self-serving, an odious attempt to grab power for power’s sake. I’ll rather follow an honest man, for the sake of our country.

One hopes those beating the drums of discord, evil speech and dismemberment are listening. Nigeria is stronger, better off as one united entity. Issues we have can always be resolved, without breaking into splinters. That is the only way the labour of our heroes past shall never be in vain.

*Adesina is Special Adviser to the President on Media and Publicity