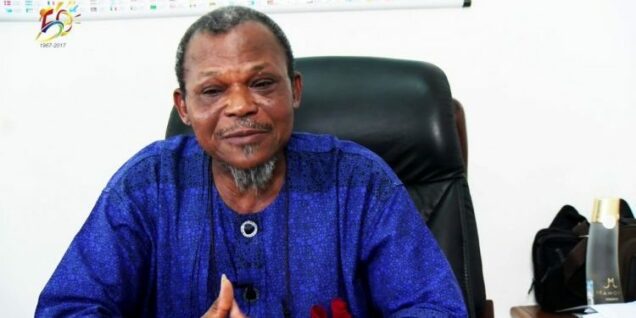 The remains of Rear Admiral Ndubuisi Kanu (Rtd.), the former Military Administrator of Lagos and Imo states were on Friday laid to rest in his Ohoroho Ovim country home in Isuikwuato Local Government Area of Abia.

In a tribute, President Muhammadu Buhari, described Kanu as “a courageous gentleman, who always stood for truth and justice.”

Buhari, represented by the Minister of State for Steel and Mines, Chief Uche Ogah, further described him as a detribalised Nigerian, who worked for the unity of the country.

The president said the deceased was loved and respected by all in his community “for impacting so much in their lives.”

He condoled with the deceased family, friends, Isuikwuato clan and Abia over the loss.

“I implore you to love one another, live in peace and harmony and work collectively for the unity and oneness of the family,” he said.

In a speech, Gov. Okezie Ikpeazu said: “The government and people of Abia are proud of their late son, who contributed immensely to the economic and socio-political development of the state.

“We appreciate the Governments of Lagos and Imo for the series of honour done to immortalise him as a former military administrator of the two states.

Ikpeazu, who was represented by his Deputy, Chief Oko Chukwu, urged the immediate family and Isuikwuato community to accept Kanu’s death with fortitude.

“Death is beyond the control of man,” he said, and prayed God to grant his soul eternal rest.
Also, Gov. Hope Uzodinma of Imo, represented by his Deputy, Prof. Placid Njoku, and his Ebonyi counterpart, Dr Dave Umahi, represented by his Deputy, Mr Kelechi Igwe, paid glowing tributes to Kanu, who they described as a selfless and astute administrator.

The Chief of Naval Staff, Vice Admiral A.Z.S. Gambo, also described the deceased as “a fine soldier and astute administrator”.

According to Gambo, the deceased not only contributed to the peace of the country but strove hard to leave indelible marks in governance through his selfless service.

Earlier in a sermon, the Prelate, Methodist Church Nigeria, Dr Samuel Uche, admonished Nigerians to have the fear of God and live a life that would put them in good standing with Him, when they die.

Uche described Kanu as “a tremendous icon, a peace lover, who stood for justice and fair play,” adding that he exuded the spirit of nationalism, while alive.

“His death has created a big vacuum in Isuikwuato and his memory will live with us forever.

“He was a good man, peace-loving and philantropic, always making peace and reconciling feuding communities in the area,” Osondu said.

Oji also described the deceased as “one of the icons of our town”, adding, “Our town has lost the biggest icon you can think of.”