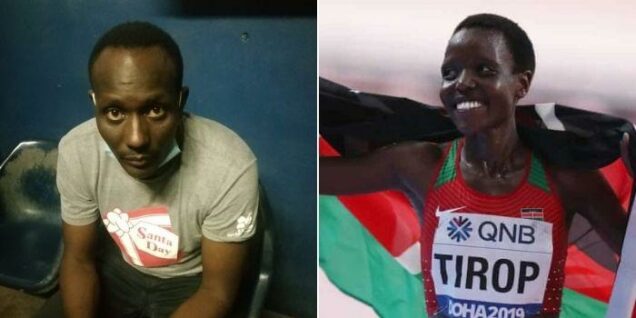 Ibrahim Kipkemoi Rotich, who has been on the run after the murder of his wife Agnes Tirop, has been arrested.

Tirop, a two-time world champion bronze medallist was found on Wednesday morning lying on a bed at her home in the town of Iten, with stab wounds in the neck and abdomen.

However, the National Police Service said on Thursday that her husband was arrested in the coastal city of Mombasa.

The statement released by Police said:

“Suspected killer husband of Agnes Tirop, the long-distance runner heroine recently murdered at her home, has been arrested. The suspect, one Ibrahim Kipkemoi Rotich, who has been on the run with police on a hot trail, was nabbed in Mombasa by diligent police detectives.”

The police had been hunting for Rotich since Wednesday after his family reported that he had called in crying and asking for God’s forgiveness for something he had done, the Associated Press news agency quoted Tom Makori, Elgeyo Marakwet county police chief, as saying.

The Directorate of Criminal Investigation said in a Twitter post that Rotich was arrested after he “slammed his gateway vehicle into a lorry, at Athi River, along Mombasa road, as he desperately escaped [our] dragnet”.

“The suspect is currently being grilled by detectives at Changamwe police station, for more details into the murder, before being arraigned to answer to murder charges,” it added.

Coast Regional Commissioner John Elungata told local media that the suspect was waiting to be transferred to Nairobi early on Friday where he will be taken to court.

Last month, Tirop broke the world record in the women-only 10-kilometre road race in Germany, crossing the line in 30:01 to shave 28 seconds off the previous record held by Morocco’s Asmae Leghzaoui since 2002.

Her career took off when she won the world cross-country title in 2015 at the age of 19 to become the second-youngest champion ever.

“It is even more painful that Agnes, a Kenyan hero by all measures, painfully lost her young life through a criminal act perpetrated by selfish and cowardly people,” Kenya President Uhuru Kenyatta said in a statement on Wednesday.