Getting my dad's support for music was tough - Ayanfe 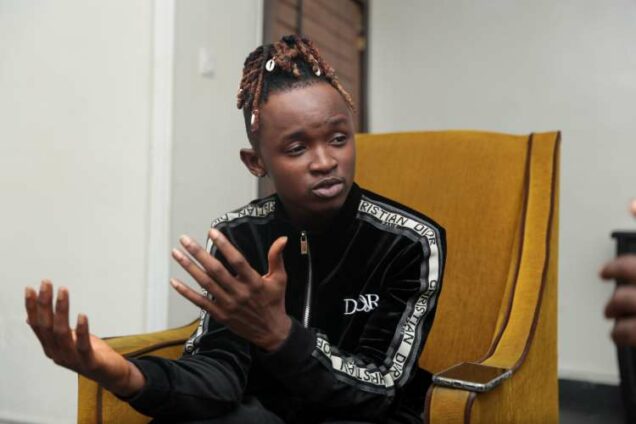 He received a direct message (DM) from DMW label boss who invited him over, an invitation that transformed his career.

Ayanfe has built up a loyal base for his impactful Afro-Pop style, cementing himself as one of the artistes of new generation to look out for in the next decade.

Following a couple of acknowledged singles, Ayanfe recently released his debut EP, “All That Matters” which offers a window into the things that inspire him.

In this interview, with PM News Entertainment, the Ekiti-born act speaks about his career, life before stardom, debut EP, working closely with Davido, the shocking death of his mentor, Obama DMW, and other issues.

You dropped your first project, “All That Matters” EP on September 2, 2021. How is the feedback so far?

Actually, the feedback from the project has been crazy, it has been amazing, my fans generally have actually impressed me, you know. In
3 weeks, I got over 2 million streams on all platforms and it’s still counting. The feedback has been great. Thank God.

Not many knew you until you did the cover of Davido’s “Risky” 2019, tell us about your career before then.

I was making music, just like every other kid in the block. Actually, I was on a label before that but it didn’t work out because you know a lot of things happened when my contract got expired. I just wanted to do different things. So, I started making covers of popular songs that I like personally, so that was how I did “Risky”. It caught the attention of Davido. That was how the signing came through.

When you got a call from Davido, how will you describe the moment?

That is still my best feeling ever. I think any feelings that will beat that is probably if I perform at the 02 Arena. You know some real feelings. It was crazy seeing Davido reaching out himself telling me to text my number and sent his number, telling me to reach out to him on WhatsApp, it was all full of emotions, it was a happy moment for me.

Before that time, how did you perceive Davido and DMW?

I have always talked about getting signed to DMW, like way back before that happened.I was like every child on the block, we have dreams, all wanted to get signed to DMW or Mavins or Starboy you know. So, it was really a dream come true and it was just me prophesizing things to life and I did not know it will happen. Then it did. Thank God.

When I was making my research prior to this interview, I discovered you dropped out of school for music, tell us about your background.

I come from a Christian background; a very religious one. My grandfather is a pastor. I am from Ekiti State but I grew up in Akure.

I did my primary education and my secondary education in Akure. From there I went to Federal University Oye Ekiti at first.

But then things happened, so I had to switch schools. Then I went to the University of Osun to study Mathematics.

I was studying Mathematics at Federal University, Oye at that time too.

At a point, I went to South Africa and I came back to Nigeria and when I got back, I wasn’t really feeling the vibe you know. I really wanted to make music and at the same time, I wanted to be serious with my education.

So, I had to pick one over another. I had series of opportunities. If I didn’t take them at that time, I felt like I might not have them come over again. So I left one for the other. I took a leave of absence from school to pursue my music and I finally relocated to Lagos.

What year was that?

Taking that big decision five years ago to now, do you have any regret doing that?

I might not be where I want to be in my head right now but I am getting closer. The road is a very long journey, so it takes a lot of concentration, a lot of hard work, and humility to get you to where you are going.

So at what stage did you discover this musical talent?

Actually, my mum sings. In the church, I was a teenage coordinator at a time. When I went to the university I was representing my school at competitions and then I have like fellowship I was attending in school so I really had time to build myself from the spiritual background.

Even though your mum sings, what was your parents’ reaction to your decision to take up music and getting signed to DMW/OMW?

Just like every kid, our parents’ mentalities are always different. I did not grow up with my parents.

I grew up with my grandparents, so my grandpa as a Deeper Life pastor, wasn’t interested in anything I want to do about music. So we are more of a go-to-school kind of family.

But my mum supported me.

Like the stubborn kid that I am, I decided to chase my music and when it happened they were happy, that was it.

How long have you been doing music?

I started entering the studio to record when I was like 10 years old. I could remember the first producer I worked with, his name his DOT.

What are the challenges you have encountered in your career?

The challenges are always there, like getting people to hear you.

So, the challenge I face was getting people to hear me. I never had a problem with where I was going to make music, probably a studio. I have always had access to studios when I was young, either my mum will pay for it or somebody. But mostly it’s you getting people to hear you because unlike of recent that the social media has made everything easy, as far back as 2011 to 2014, you have to send emails to labels, you have to burn CDs, go to radio stations and give them your CDs, you know, it was like 2014, 2015, 2016.

Then, during the COVID-19, we understood that the music business is something we can actually do from our home and be making our millions. Social media and streaming have also made everything easy.

The kind of music we have all around is “world” music, but you coming from a religious background, do you infuse gospel in your own music?

You can also make conscious music, you don’t have to talk about God in every music before you pass a message or bless people, there are conscious music, music that talks about a particular situation, probably something very relating to what people are really going through or probably you are about to make mistake. Sometimes you make music and people will comment “I feel blessed”, “your song made me pass through this stage of my life”.

Let’s talk about your debut project, “All That Matters EP”, what is the theme of the EP?

The project is about love because in our society we’ve forgotten the importance of love. It’s a random word everybody uses whether it is agape love or relationship. Love has been so underrated you know, even the Bible says “love is the principal thing” like it’s the major thing, without love every other thing will be useless.

So, when Obama, my boss passed, it just made me realise that if there’s no love everything will be worthless because if he had not shown me some amount of love while he was alive, I don’t feel like I will miss him this much the way I miss him now. So, the EP is just related to the fact that love is important.

How close were you to late Obama DMW?

What are you currently working on now?

I am working on videos, you will be getting some videos off the EP, like Vanessa, 44. The videos should be dropping in a bit so, you guys should expect magic and fire.

Davido is on your EP, what is it like working closely with a big artiste like him?

Davido is the coolest guy, it is always zero stress with him, he’s full of energy, and always happy, you rarely see OBO angry. Recording with him was not hard, we are family, he’s a big family, the other artists are also there, everybody is free with him, as long as you are not lazy and you are not talkative. It’s very important because whether you like it or not, he’s a big celebrity. You have to be a trustworthy person before you can actually be around him.

You were studying Mathematics in school, so if you’re not doing music…..

I will probably be working in CBN or be a banker in one of the big banks, my dad works in CBN, but it’s a very boring job, I cannot do 9 – 5 job, my dad is still working there, I had a comfortable background but i don’t like to talk much about it because it’s not like it’s anybody’s business.

So you don’t have that tough story that we always had from artistes when they first arrived in Lagos?

I never slept under the bridge but I hustled for myself because my dad never supported my music until it started popping like 3 years ago. So it was all about me hustling for myself. There was a time when I and my dad fought for like a year. We were not talking because I relocated to Lagos and I wanted to do what I wanted to do.

You know I told you I relocated to Lagos, there were more stories to it. It’s just me rounding up the situation. You know my dad as a CBN guy, an auditor, an accountant, he’s a guru, so it’s all about the book, my grandfather is also a former accountant for NYSC as well.