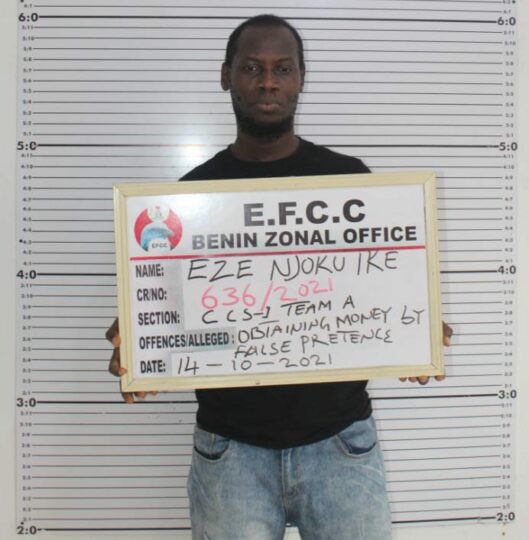 The Benin Zonal Command of the Economic and Financial Crimes Commission, EFCC, on Friday arraigned Eze Njoku before Justice Okon Abang of the Federal High Court in Warri, Delta State.

Njoku was arraigned on a six count charges bordering on retention of proceeds of crime.

He was alleged to have received the sum of N129, 000,000 in suspected proceeds of crime from Smart Alban, the Managing Director and Chief Executive Officer of Smart Alban Global Investment Limited and SA-FX Global Limited, a self-styled trader in forex.

The charge against him reads: “That you Eze Njoku (M) on or about the 21st day of August, 2020 at Delta State within the jurisdiction of this Honourable Court directly took possession or control of the sum of N10,000,000 (ten million naira) transferred into your bank account number 6718072011 domiciled in First City Monument Bank, from the bank account of SA-FX Global which funds you knew or reasonably ought to have known forms part of unlawful act of Smart Alban Ike to wit: obtaining by false pretence and thereby committed an offence contrary to Section 15(2)(d) of the Money Laundering (prohibition ) Act 2011 (as Amended in 2012) and punishable under section 15(3)of the same Act.”

Njoku pleaded not guilty when the charge was read to him.

In view of his plea, the prosecution counsel, Francis Jirbo prayed the court to fix a date for trial and to remand the defendant in prison custody.

Justice Okon Abang fixed January 21, 2022 for hearing and ordered that the defendant be remanded at the Correctional Centre.