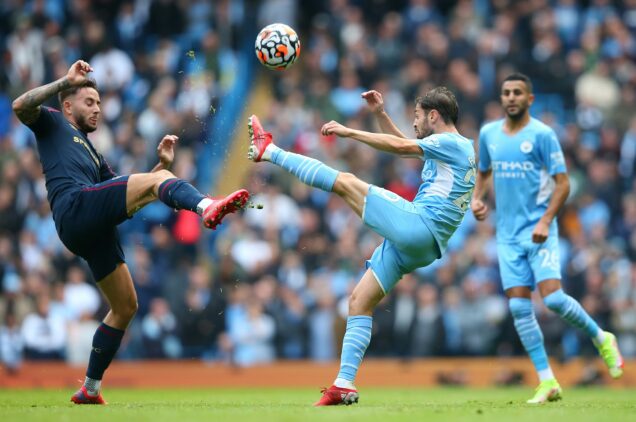 Goals from Bernardo Silva and Kevin De Bruyne gave Manchester City a deserved victory over Burnley at the Etihad Stadium.

In a game Pep Guardiola’s men controlled throughout, Manchester City opened the scoring in the 12th minute, when Nick Pope pushed Phil Foden’s drive from the edge of the area into the path of Bernardo, who lashed home from two yards to complete a move he instigated through a neat one-two with Joao Cancelo.

The Belgian had seen a cross come to nothing, but when the visitors failed to clear it, he arrowed the loose ball into the far corner to deservedly double City’s lead and complete the victory.

City started brightly at the Etihad, with Riyad Mahrez forcing Pope into a smart save with a 20-yard effort that skipped off the floor and the Clarets keeper was called into action again as he blocked Cancelo’s first-time volley after a superb ball to the far post from De Bruyne.

Burnley’s best opportunities came in the first half. Cornet should have done better when he latched onto McNeill’s brilliant defense-splitting pass, whilst Brownhill was inches away from picking out the bottom corner after Jack Cork’s cross dropped into his path.

It was a similar story after the break, with one-way traffic towards the Burnley goal, though City struggled to turn their superiority into goals.

Mahrez arrived unmarked in the area to meet Bernardo’s cutback but saw his effort graze the bar, whilst when the Portuguese playmaker sent Phil Foden clear of the opposition defense, the youngster failed to get enough on his attempt to lob Pope.

Aymeric Laporte also saw a good opportunity go begging as he blazed over from inside the area, whilst at the other end, substitute Ashley Barnes sent an effort straight at Steffen after a rare Burnley attack.

De Bruyne’s goal gave City the breathing space they needed in the closing minutes, but Sean Dyche’s men might have set up a nervy finish had Chris Wood not lifted Nathan Collins’s knockdown over the bar from six yards.