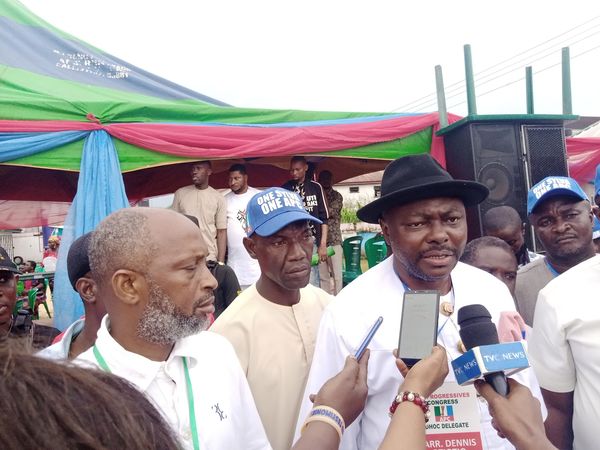 Chief Dennis Otiotio, new chairman of Bayelsa APC speaking to journalists after he was elected

Retired Deputy Commissioner of Police (DSP) Yusuf Adejo and Chairman of the state congress planning committee disclosed this when he announced the results of the congress on Saturday in Yenogoa.

Adejo said that Otiotio scored 582 votes to defeat his closest rival, Mr Dan Igrubia, who scored eight votes.
He said that Mr Ebipadei Fekoweimo was also elected as the state APC Secretary during the congress.

Adejo said that the winners emerged after a transparent election and urged party faithful in the state continue with their support for the party.

Otiotio in his acceptance speech, promised to reposition Bayelsa APC to ensure its victory in the 2023 general election.

“The Bayelsa people are yearning for good governance, which the APC is known for, we will do our best to ensure that the party is re-positioned in the state to take its right position,” he said.

The congress was monitored by the officials of Independent National Electoral Commission (INEC) and other stakeholders in the state.