End of the road for Kenyan child murderer Vampire Wanjala 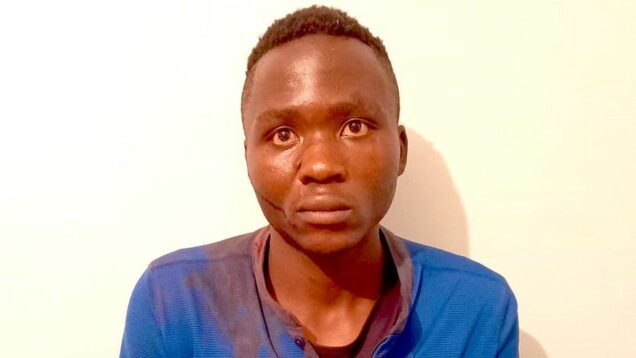 Wanjala was arrested on July 14 over the disappearance of two children, but in a chilling confession, admitted to killing at least 10 others over a five-year period.

He said he killed the children “sometimes through sucking blood from their veins before executing them”, the Directorate of Criminal Investigations (DCI) said at the time.

The 20-year-old was due for a court appearance Wednesday in Nairobi over the cold-blooded murders which targeted 12- and 13-year-old children, when officers noticed during the morning roll call that he had disappeared.

But a mob caught up with him Friday after he was identified by schoolgoing children at his rural home in Bungoma, more than 400 kilometres (250 miles) from the police station he had escaped from.

“He comes from this area and so the children saw him and knew it was him and that is when information spread around and locals started pursuing him,” area administrator Bonface Ndiema said.

“In the end he ran into a neighbour’s house but he was flushed out and lynched.”

Police had in July described Wanjala’s arrest as a major breakthrough in an investigation into a spate of disturbing child disappearances in the East African country.

His victims were drugged and drained of their blood and some of them strangled, police said.

According to police, Wanjala’s first victim was a 12-year-old girl he kidnapped five years ago in Machakos county east of Nairobi.

The murder of his next victim in western Kenya sparked protests, with locals torching the house of the person they suspected killed the boy.

“Unbeknownst to some of the worried families, their children were long executed by the beast and their remains dumped in thickets. Others were submerged in sewer lines in the city and left to rot away,” the DCI said in July.

The bodies of several children feared to have died at Wanjala’s hands have yet to be found.

Three officers who were on duty at the Nairobi police station where he was held were arrested this week on allegations that they either aided or “neglected to prevent” his escape.

A court ordered their release on bail on Friday as a probe into the escape gets under way.

Police spokesman Bruno Shiosho told AFP they have launched a forensic investigation into the identity of the lynched man.

“The locals have said it is him… For now we can confirm that a man locals say is Masten Wanjala who was on the run has been lynched in Bungoma,” he said.