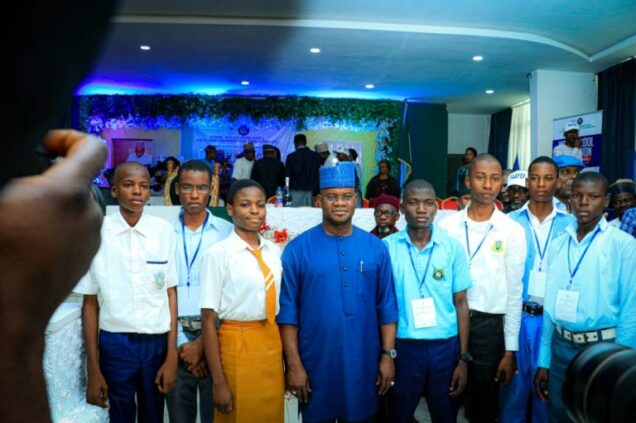 Governor Yahaya Bello of Kogi said his Administration has increased budgetary allocation to education sector from 20 percent to 30 percent in the 2022 fiscal year.

Bello stated this in Lokoja at the grand finale of the four-week Inter-School Quiz and Essay Competition for public Secondary Schools in the state, sponsored by Pharmacist Abdukareem Asuku Youth Empowerment Foundation (PAAYEF).

The governor had in the 2021 fiscal year, gave 20 percent budgetary allocation to the education sector.

The governor on Saturday stressed the importance of education as the bedrock of development and assured that both the infrastructural development and wellbeing of teachers and students would be enhanced for maximum productivity.

Bello said he benefitted from the public education system and has a governor he has no cause other than to raise the bar for future generations.

He vowed to make public schools in the state very attractive to the young ones, stressing that education remained one of the critical thematic areas of his administration.

He noted that the State Education Law had forbidden pupils from roaming the streets during school hours, and promised to deploy enough resources to the sector that will make private schools unattractive to students and their parents.

He restated his determination to make Kogi attain the number one position in education in the country, and assured that the government was working hard to make educational institutions in the state free from bandits and kidnappers.

”No child during my tenure will be abducted from schools or anywhere across the state. I will not tolerate the politicization of security in the state.

”We have put measures in place to safeguard our pupils and their teachers and I call on stakeholders to join the crusade,” he said.

Bello commended PAAYEF’s founder, Pharm. Abdukareem Asuku, who is also his Chief of Staff, for the gesture in supporting and boosting education in the state

He enjoined his appointees and elected members in the administration to contribute to the development of education in the state.

Earlier, the state’s Commissioner for Education, Science, and Technology, Mr. Wemi Jones, noted that Kogi was rated 28 positions in WAEC result in 2018, but noted that the State had worked hard to change the narrative by upscaled to 14 positions in the last WAEC rating.

He assured the people that the state would not rest on its oars until it had won the first position in all public examinations in the country, urging all stakeholders to contribute their quota to the development of the educational sector.

Jones expressed excitement with the performance of the students, noting that the exercise had opened up some challenges facing the sector and promised to tackle them head-on.

”Giving necessary encouragement, the students can compete favorably with their counterparts nationally and internationally,” Jones said.

He urged corporate organizations, groups, and individuals to support the sector in various forms ranging from financial, old students’ contributions, and to communities to protect and preserve education infrastructures in their domains.

Speaking, the PAAYEF founder said the competition was his modest contribution to raise the confidence and consciousness of students of public schools in the state.

He explained that the four-week events had three schools qualified from each senatorial district, that emerged as zonal winners, held between Sept. 25 to Oct. 9, 2021.

He noted that the students were tested in English Language, Mathematics, Physics, Biology, Chemistry and General papers, adding that inter-school debate was introduced at the grand finale.

A student, Esther Itopa, from Harmony Secondary School Lokoja, the only private school featured in the event won the spelling Bee.

Tijani Sadiq from Demonstration Secondary School, Onikuko, Ogaminana, won the first position in the written test and received a full university scholarship from the foundation.

Musa Alhassan from Government Science Secondary School, Okenya and Sam Abdullazeez from ECSS Ogaminana, who took second and third positions respectively, would have scholarships for their secondary school education, including payment of WAEC or NECO fees for Alhassan who got second.

NAN reports that some outstanding students in the competition received consolation prizes.