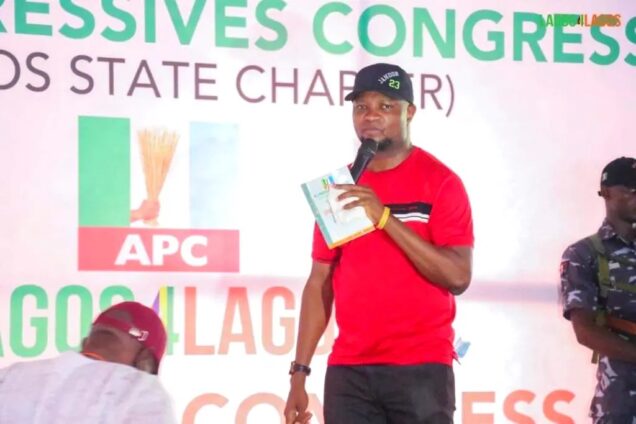 A group within the All Progressives Congress, APC, Lagos chapter, Lagos4Lagos, on Saturday, elected Sunday Ajayi, as the party’s chairman in the state.

The leadership of the group, held a parallel congress at the Airport Hotel, Ikeja, while another group loyal to the former governor of Lagos State, Akinwunmi Ambode, held another congress at a designated venue at Obanikoro area of the state.

At the Lagos4Lagos congress, Bode Makinde was elected as Secretary.

Reacting to his election as the state chairman, Ajayi said, impunity has ended with the conclusion of the state congress by the group.

“Today, impunity is over in Lagos APC. There’s no more ‘Baba sope.’

He, however, explained that the Lagos4Lagos group has set the pace for others to follow.

“You can all see that they cannot do anything until their father returns. With what we have done today, the journey has just begun.

“It’s because of what we have done that they picked their own chairman from my local government in Ojo and my ward. I have watched their chairman very closely, Cornelius Ojelabi, he can not aspire for anything, that’s why they picked him.

“This will not in anyway deter us. He can not say who will be the candidate for governorship in 2023. We have our destination and we have to work towards it.

“Our destination is to be the governor of Lagos state in 2023. If we put in more effort, they will give us the governorship ticket,” he said.

Jandor, therefore, pleaded with the newly elected state executive committee to be accommodating in order to achieve the objectives of the APC.

Also, the Tunde Balogun-led out going executive, held a congress in an atmosphere described as; “seamless and peaceful,” at Mobolaji Johnson Arena, formerly Onikan Stadium, Onikan, with 1,615 delegates who participated in the voice election.

Lagos State Governor, Mr. Babajide Sanwo-Olu, led other personalities at the event held under the supervision of the Independent National Electoral Commission (INEC) and Electoral Committee members appointed by the party’s National Caretaker Committee of the APC in Abuja.