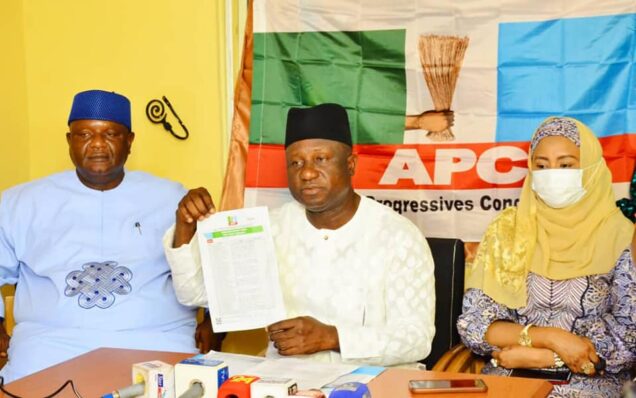 Mr Gbenga Elegbeleye, Chairman of the National Committee for Osun Congress of the APC and (left) Mr Gboyega Famodun, the re-elected as the chairman of Osun APC: Elegbeyele says the parallel state APC congress conducted by supporters of former governor Aregbesola was a funeral

Mr Gbenga Elegbeleye, the Chairman of the National Committee for Osun Congress of the All Progressives Congress(APC) has described the parallel congress conducted in the state by supporters of former Governor Rauf Aregbesola on Saturday as a mere funeral ceremony.

Elegbeleye said at a news conference on Sunday at the APC’s secretariat in Osogbo that his committee was not aware of any parallel congress in the state as being speculated.

The News Agency of Nigeria (NAN) reports that a faction within the party, The Osun Progressives (TOP), loyal to former Gov. Rauf Aregbesola, held a parallel congress on Saturday.

The Ileri Oluwa Group, loyal to Gov. Gboyega Oyatola, held its congress at the Osogbo City Stadium, where the immediate caretaker chairman of the party, Mr Gboyega Famodun, was re-elected as the party chairman.

TOP, at a parallel congress, elected the immediate Secretary of the party, Alhaji Rasak Salinsile, as its Chairman.

Elegbeleye, who described the insinuations of parallel Congress in the state as a fallacy, said on no account could any congress be held outside the knowledge of the committee, as prescribed by the party’s principles and guidelines.

“As far as we are concerned, there was no congress anywhere else, except the one conducted and supervised by me and other committee members.

“We came here on Friday to address a stakeholders meeting where we announced the venue of the congress and this was done in the presence of the media.

“As you all know, we were saddled by the leadership of the party at the National Secretariat to conduct Osun APC Congress.

“When we arrived, we announced the venue of the congress. So, if anybody goes to the shrine to do another thing, that may probably be a funeral or marriage ceremony, not a congress.

“The only congress we organised at Osogbo City Stadium is APC congress and so we cannot recognise or assume that there was a congress anywhere”, he said.

Elegbeleye said the committee had done the needful as expected, having performed the task in the presence of the required electoral empire and other relevant agencies.

“The congress was successful, hitch-free, fair and credible as envisaged.

“It was conducted in accordance with the constitution, principles and guidelines of the party as enshrined in Article 20 as read out yesterday”, Elegbeleye said.

Earlier, the Chairman-elect, Famodun, lauded the committee for being transparent, accountable and for ensuring that the entire process ended well.

Famodun, who expressed profound gratitude to the loyalists of the party for re-electing him, promised not to let them down.

“I thank the committee for a job well done and for giving us a wonderful executive through the congress conducted. I want to assure you all on behalf of my team that we will put in our best.

“I commend the press for doing us proud and for ensuring effective coverage”, Famodun said. (NAN)