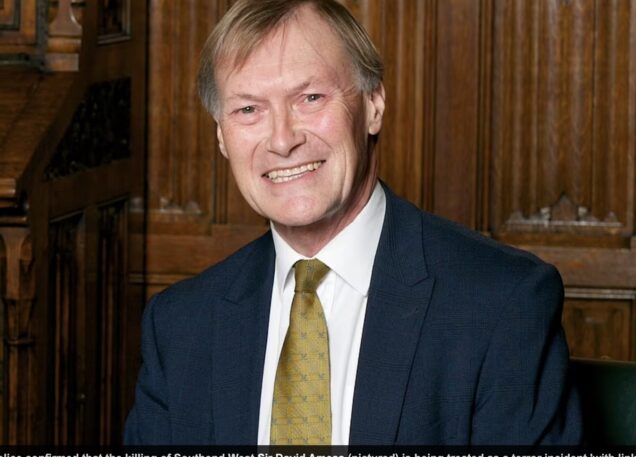 British Prime Minister Boris Johnson announced today the town of Southend-on-Sea in slain MP David Amess’s electoral district would be made into a city in his honour.

He made the promise today while leading tributes to the “dedicated, passionate” Amess, a veteran lawmaker, who was killed Friday.

In his lifetime, Amess had championed passionately for the upgrading of the town during his time in parliament.

Johnson’s announcement was applauded by other MPs.

Amess, 69, was stabbed to death by a British-Somalian while meeting constituency voters in an attack that has heightened concern about politicians’ safety.

The attacker knifed the MP to death at a church on Friday in Leigh-on-Sea, east of London. At the scene, armed police arrested the 25-year-old son of an ex-media adviser to a former prime minister of Somalia.

He remains in custody.

They are treating the attack, which Johnson described as a “contemptible act of violence”, as a potential terrorism incident.

Amess was the second British lawmaker to be killed in five years and his death shocked lawmakers across the political spectrum.

“We will not allow the manner of Sir David’s death to in any way detract from his accomplishments as a politician or as a human being,” Johnson, wearing a black tie, told a packed House of Commons chamber, which earlier observed a minute’s silence.

“David was a patriot who believed passionately in this country, in its people, in its future.

“He was also one of the nicest, kindest, and most gentle individuals ever to grace these benches.”

There will later be a procession to St. Margaret’s Church for a service of remembrance for the father of five.

Amess’s family, who earlier on Monday visited the scene of his murder, said he was a patriot and a man of peace.

“So, we ask people to set aside their differences and show kindness and love to all. This is the only way forward. Set aside hatred and work towards togetherness,” they said.

The murder of Amess has prompted questions about politicians’ safety and what action should be taken to address the growing problem of online abuse directed at them.

They had been contacted by police to discuss their activities and review arrangements, he said.

“The prime minister shares the concerns with a number of MPs and ministers that this attack cannot get in the way of democracy. We will not be cowed by those who seek to divide us and spread hate.”

Detectives are quizzing suspect Ali Harbi Ali, a British national, under counter-terrorism laws, looking at a possible motivation linked to Islamist extremism. Officers are also searching properties in and around London.

Ali had been referred to the anti-radicalisation programme known as Prevent, the BBC said.

But he was not of formal interest to the domestic security agency MI5.

Amess was also chairman of the cross-party committee which looked to foster good ties between Britain and Qatar, and the Times newspaper said detectives were looking at this link.

Amess had been on a visit to Qatar last week.

Police have warned about the danger the COVID-19 pandemic posed in terms of radicalisation as vulnerable people spent more time online, potentially exposing them to extremist material.

Lawmaker Chris Bryant from the opposition Labour Party said he had received a death threat after calling for people to share “a kind message on Twitter today to a politician we disagree with” following Amess’s murder.

Police said they had arrested a 76-year-old man on suspicion of malicious communications.

“Let’s have nicer language. Let’s have our differences, and that’s important,…but what I don’t want is the hate and the nastiness,” Lindsay Hoyle, the Speaker of parliament’s House of Commons, told Sky. “Today is a starting point where we can change the face of politics.”