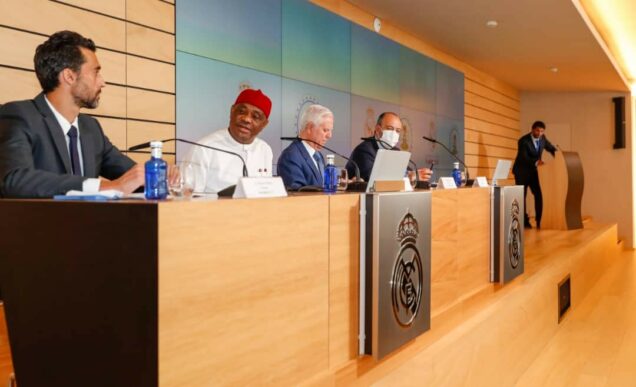 Governor Nyesom Wike at the weekend revealed that the Real Madrid Academy to be established in Rivers State will also admit girls.

Wike spoke when he led officials of Rivers government to ratify an agreement for the promotion of sport amongst children and youths in the state with the Real Madrid Foundation in Spain.

The signing of the agreement between the Rivers State government and the Foundation took place at the Auditorium of Real Madrid Sports City, Fuerzas Armadas avenue, Madrid, Spain.

The governor explained that the Real Madrid Academy which has been commissioned in the state intended to admit only male students, but following the huge application received from prospective female students, the State government had to reconsider the policy.

“We had to stop to include the girls. We are very ready to kick-start the school and we believe that this is a very good opportunity for our people. We are honoured to be identified with Real Madrid, it is a good brand for us.”

Wike reaffirmed his belief that sport is an important factor in social integration and in the promotion of ethical values such as solidarity, participation, team spirit, respect for one’s opponent and non-discrimination.

He was accompanied to Madrid by the Governor of Abia State, Dr. Okezie Ikpeazu and the Rivers State Attorney General and Commissioner for Justice, Professor Zacchaeus Adangor (SAN).

The Real Madrid Foundation reiterated that it will continue to promote sport among children and youths in the understanding that sport contributes to the comprehensive development of a young person’s personality.