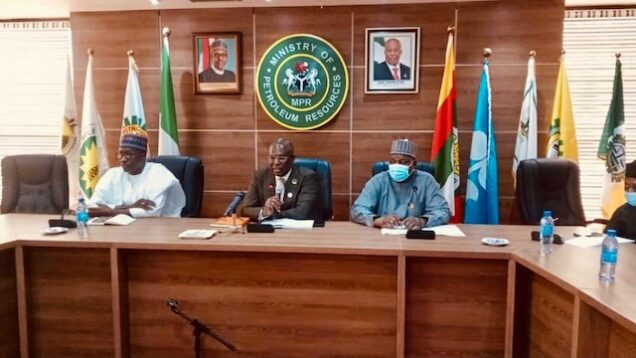 Sylva at the inauguration of the new agencies of PIA

The CEOs of the Department of Petroleum Resources, the Petroleum Products Pricing Regulatory Agency and the Petroleum Equalisation Fund have all been technically sacked.

This followed the scrapping of their agencies, in line with the provisions of the Petroleum Industry Law.

Minister of State for Petroleum Resources, Chief Timipre Sylva inaugurated the boards of the two agencies on Monday.

He however said the workers of the three scrapped agencies would be protected.

He explained that with the passage of the Petroleum Industry Act, the NPRA and NURC had taken over the functions of the DPR, PPPRA and PEF.

“The law states that all the assets and even the staff of the DPR are to be invested on the commission and also in the authority. So that means the DPR doesn’t exist anymore”, Sylva said.

“The law also provides for the staff and the jobs in those agencies to be protected.

“But I’m sure that that doesn’t cover, unfortunately, the chief executives, who were on political appointments.”

He stated that the process for aligning the workers of the defunct agencies with the new regulatory bodies had already commenced, as the staff had to be rationalised.

“The authority has its staff coming from the defunct PEF, PPPRA and DPR. The commission has staff coming over from DPR and the process is going on for the next few weeks.”

Sylva stated that the inauguration of the boards on Monday marked the beginning of the successor agencies.

“The PIA provides for the upstream regulatory commission and the establishment of the midstream and downstream authority.

Tiimipre Sylva charged the new Chief Executives to be up and doing in their respective areas to ensure that there is a smoother, fuller actualization of the PIA

Komolafe said the commission would deliver on its mandate as captured in the new petroleum Act.

“Nigerians should expect massive deliverables in the sense that the PIA has ended the regime of uncertainty in terms of the governance of the industry,” he said.

He also said the commission would ensure that the country hits its OPEC quota in crude oil production, as the NURC would be an enabler of investments.