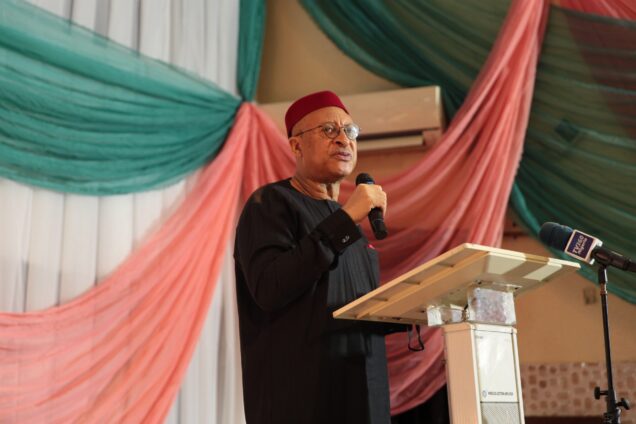 Prof. Pat Utomi, a renowned professor of political economy and management expert, has said the #EndSARS protest was the arrival of citizenship in Nigeria.

Utomi said this at an event organised in Lagos by the African Centre For Media And Information literacy (AFRICMIL} headed by Chido Onumah, the author of the book, “We Are All Biafrans.”

The event was a commemorative lecture and public presentation of the book – ‘Remaking Nigeria: Sixty years, Sixty Voices’ by Onumah with the theme: ‘One Year After #ENDSARS, 35 Years after Dele Giwa And The Quest To Remake Nigeria.’

Utomi who is also the founder Centre for Values in Leadership said the youths who organized #EndSARS movement had shown that citizenship can come to Nigeria.

He added that young people needed to be encouraged to participate actively in politics.

“If you look at the leaders of the world today, they are young people, and majority of them were groomed from their days in university.

“The majority of us here are products of unionism. Majority of the leaders that have ruled started as youths as well,” he added.

The management expert who said he witnessed the attack at the Lekki Toll Gate said he tried his best to reach out to Lagos State Government, but it was too late.

“I was sad that they stopped (protesting) because the killing was terrible, but they could have continued on social media and run characters out of hands.

“What we need to do is learn to organize and what we must do now is convert all these young people to community organizers,” he said.

“We do not need 10 years to plan, everybody in Nigeria is fed up.

“If youths of Nigeria organize they can make this current order an ancient history, and I want to tell you all to try and do that,” he concluded.

The #EndSARS advocacy made global headlines last October when young Nigerians across the country and in major cities around the world embarked on protests against persistent brutality and rights violations by the Nigeria Police Force.