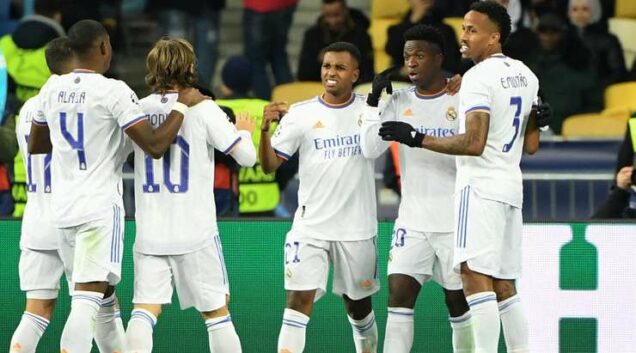 Vinicius Junior was the hero of the night as he got a brace in the encounter.

The visitors controlled the game right from the first half. Madrid got the first goal on 37 minutes from an own goal by Sergiy Kryvtsov.

Building on the momentum from snatching a late first-half lead, the visitors doubled their advantage only five minutes into the second period of play.

A delicate, defense splitting pass from Luka Modrić played in Vinícius Júnior who calmly dinked the ball home, putting the bow on top of a superb Real Madrid move.

The Brazilian then bagged his second just five minutes later when he cut through the Shakhtar defense with some fancy footwork before coolly clipping the ball into the back of the net.

The goal would allow the La Liga giants to shift to cruise control for the remainder of the match, after a scintillating opening ten minutes of the second half.

Things turned ugly for the Ukrainian outfit when Vinícius played a square ball to fellow Brazilian Rodrygo, who cutely side-footed the ball high into the back of the net to cap off Real’s superb performance.

A late Karim Benzema goal would be the icing on the cake for the visitors, starting a mass exodus from the Olimpiyskiy Stadium.