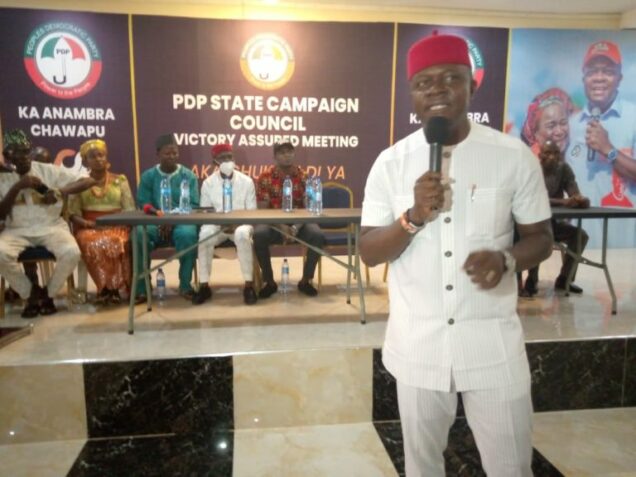 Valentine Ozigbo, the candidate of Peoples Democratic Party, PDP for the Anambra governorship election: Peter Obi says he is the best candidate among the contestants and most qualified for the job of Anambra chief executive

Mr Peter Obi, former governor of Anambra, has described Valentine Ozigbo, the candidate of Peoples Democratic Party, PDP as the best candidate among the contestants and most qualified for the job of next chief executive of the State.

Obi said this when a coalition of non Anambra indigenes living in the state adopted and endorsed the candidature of Ozigbo in Awka, the state capital.

Obi said the PDP candidate would revive the dilapidated road and other public infrastructure including the health sector.

According to him, what Nigerians need is a nation which works for everybody irrespective of where they are from, a nation with good healthcare, education and security for all.

“What is happening anywhere should be of interest to others elsewhere, there is no separate good society for indigenes and non indigenes,” he said.

Also speaking at the event, Ozigbo said his administration will not discriminate against non indigenes in the state.

“I will give equal opportunity to every resident of the state if elected governor on Nov. 6.,” Ozigbo said.

He added that he was a strong believer in the saying that ‘all men are equal before God’ and would not discriminate against anyone but would ensure that there was an environment for fair and positive competition.

The PDP candidate said there was no difference between an indigene and non indigene and that his administration would work for a peaceful, secure, and progressives state with best infrastructure that would benefit all.

He thanked them for the massive endorsement and urged them to cast their votes for him and be sure of a better place to stay and work.

“Merit and proficiency will inform my appointments, no qualified person will be denied opportunity because only the best is good for Anambra.

“In my campaign organisation, I have people from others states and Southeast in the team, that is because we are interested in what you can do and not who you are,” he said.

The group consists of no fewer than 300 residents of Anambra from Imo, Abia, Ebonyi, Enugu, Delta and Rivers states as well as other enthic nationalities including Yoruba and Hausa.

Speaking on behalf of the group, Mrs Amaka Tamuno said they had evaluated the programmes of the various candidates and found that of Ozigbo to be the best for the next dispensation in Anambra.

Tamuno said they would go back to their various communities and mobilise the electorate for victory of the PDP come Nov.6. (NAN)