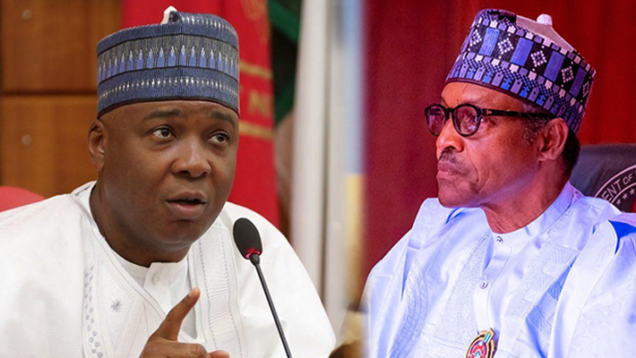 The Buhari Media Organisation (BMO) has berated former Senate President, Dr. Bukola Saraki over his claim that nothing has been done by the Federal Government to address the issues that led to the #ENDSARS protest.

The President Muhammadu Buhari support group described the comment as irresponsible and unbecoming of a statesman.

A statement signed by its Chairman Niyi Akinsiju and Secretary Cassidy Madueke said they were disappointed at the “tantrums of the former Senate President.

“We consider the position of Dr. Saraki as totally at variance with all the measures the Federal Government has taken towards addressing the issues that led to the END SARS protest. First, we need to remind Saraki that in the aftermath of the protests, the Federal Government scrapped the Special Anti-Robbery Squad (SARS) of the Nigeria Police Force ( NPF) as an immediate response.

“The Federal Government also set up the Police Trust Fund which will ensure that one percent of the federal revenue is paid into the account; the government has also voted N13.3 Billion for community policing across the country as a way of bringing policing closer to the people and ensuring adequate security, as well as initiated plans through the Revenue Mobilisation and Fiscal Commission to upwardly review police salaries and allowances”.

The group also noted that in the aftermath of the END SARS protests, the Federal and State governments had impaneled commissions of inquiry in different States of the country to unearth the remote and immediate causes of the riots and recommend measures to bring about lasting solutions to the problems associated with the riots.

“Since then the panels have sat in a transparent manner, and even awarded several millions of naira as compensations to victims of the riots, and the payments are being made as directed by the panels without let or hindrance.

“We also want to remind Dr. Bukola Saraki that in his attempt to capitalize on the END SARS for partisan political gain, he wrongly admitted that protesters were killed at the Lekki Tollgate, yet till today there has not been any verifiable evidence from any quarter that any protester was mowed down by the military or the police at the Lekki toll gate.

“We, therefore, find it disingenuous and cynical of the former Senate President to descend into the arena with the only intent to make political capital out of a national issue, and paint the Federal Government black”.

BMO insisted that following the END SARS protests the Federal Government has remained committed to addressing the concerns of Nigerian youths in various ways.

The group added that the Buhari-led government remained responsive and responsible in addressing issues that affect the youths and the steps taken are visible for all to see, except for “cynics like Saraki.”