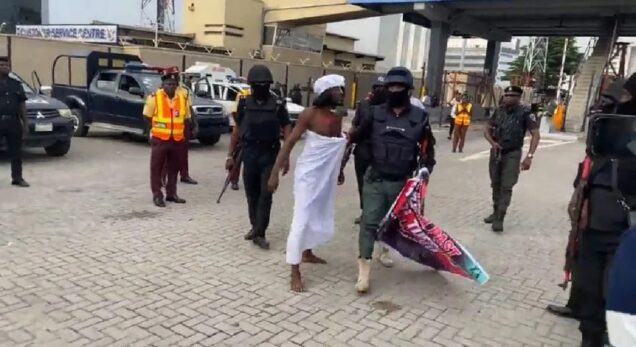 Police officers at the Lekki toll gate have arrested two protesters where the #EndSars Memorial Protest is scheduled to hold.

The two were arrested on suspicion of being protesters despite one claiming to be a journalist. The other, however, was claded in a white robe bearing a #EndSars banner.

Scores of police officers are strategically positioned at the toll gate with over 20 trucks to enforce a ban on the #EndSars memorial protests by the Lagos Police Command. Police vehicles are also on patrol at the plaza.

No protester can be seen currently at the toll gate only normal vehicular movement. Some protesters, however, are in vehicles protesting with chants, We Want Justice! Soro Soke! #EndSars! blasting their honks.