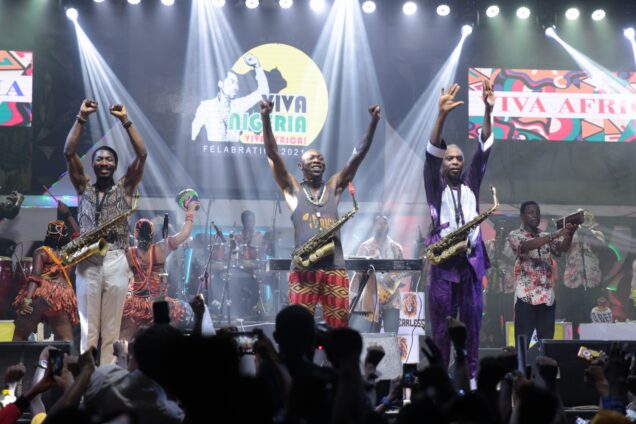 Made, Seun and Femi Kuti for Grand Finale of Felabration 2021 at the New Afrika Shrine, Lagos. Photo by Ayodele Efunla

Femi Kuti, the eldest son of Afrobeat pioneer Fela Anikulapo Kuti and alongside his brother Seun and his son Made and the Positive Force Band wrapped up the week-long performances from various music stars on Sunday at the Felabration 2021.

They gave a sterling performance.

In a twist of the event, the audience was expecting Davido as earlier announced by the organisers, but it was Koko Master, D’banj, who stormed the stage alongside the dancing queen, Kaffy.

D’banj’s performance was electrifying, and the audience was held spellbound for about an hour and a half.

He also performed his new song titled ‘stress-free with the Grammy nominee, Seun Kuti on stage for the first time.

Rave of the moment, Bella Schmurda, May D, Kayefee, Africana among other artistes also performed.