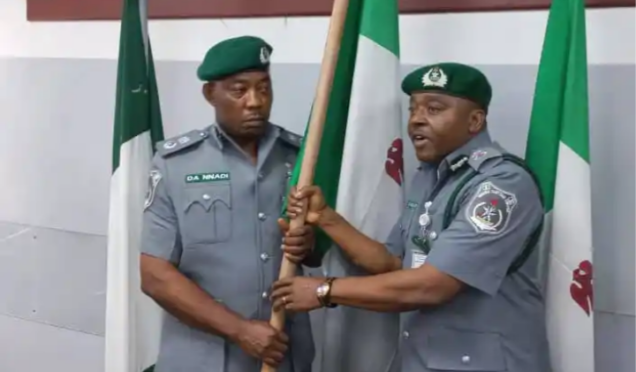 One of the newly promoted Comptrollers of Nigeria Customs Service (NCS), Comptroller Dera Nnadi has been entrusted with the mantle of leadership of Ogun I Command of the Service.

Nnadi on Tuesday took over the mantle of leadership from Comptroller Peter Kolo at the Conference Room of the Command.

Nnadi prior to his appointment had served in the Command as Deputy Comptroller in charge of Administration and was recently promoted to the rank of Comptroller of Customs.

In his handing over speech, Compt. Peter Kolo thanked the CGC and the entire Management for giving the opportunity and level playing ground to serve as the Area Controller of Ogun I Command.

He expressed his gratitude to the principal and entire officers for their unflinching support and cooperation.

He congratulated the new CAC and described his appointment as a round peg in a round hole.

Kolo added that he is rest assured that Nnadi will sustain his legacy and even build on it.

He prayed and wished him well in his new endeavour.

In response, Nnadi thanked the NCS Management for finding him worthy of the position and pledged to discharge his duty with due diligence and a high sense of responsibility.

He thanked the outgoing CAC for his mentorship and selfless service to the Nation.

Nnadi appreciated Kolo’s administrative style and promised to uphold his legacy to an enviable status for the Service.

He wished him happy and peaceful retirement.

He called on all the principal officers and the entire Officers/Men of the Command to extend their loyalty and cooperation to him.

Kolo has proceeded on his three months pre-retirement leave.