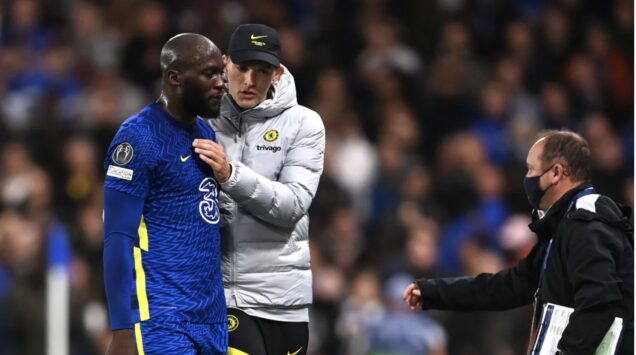 Tuchel consoles Lukaku as he limps off the pitch

Chelsea Coach Thomas Tuchel said striker Romelu Lukaku twisted his ankle in the Champions League match against Malmo FF and will be out of action for weeks.

Timo Werner suffered a hamstring injury and will similarly be out of action for some time, the coach told the media.

Tuchel said Lukaku’s injury was not related to the tiredness he had spotted in the Belgian after the international break, and was purely a result of the challenge on him, which resulted in the penalty that gave Chelsea their second goal against Malmo FF.

‘Romelu twisted his ankle when he was fouled in the box and Timo has a hamstring injury, so it will take a while for both of them,’ said Tuchel.

‘We need more examinations to be more precise but they will be out for some matches.

‘It was necessary that Romelu was on the pitch, he started very strong. I spoke with him about the situation, that I think he carries a bit of a mental fatigue around with him, and that I think it’s also normal, but he’s our number nine, he’s our reference up front and the best thing against mental fatigue is a goal and we knew that we could be the dominant team.

‘We knew today we built a fast attack with Mason and Timo around him, and him as the reference point up front in the middle, and I had a strong belief that he could in a Champions League match turn things around in terms of scoring and being decisive, which he actually did because he was super strong in our start and he took the foul, so maybe without him it’s not 2-0.

Chelsea cruised to a 4-0 win over Malmo FF despite the injuries suffered by Lukaku and Timo Werner.

Lukaku left the game at Stamford Bridge on 18 minutes, while Werner limped off just before half-time holding his hamstring.

Chelsea dominated the match from the onset with Werner missing a glaring opportunity from inside the six-yard box on six minutes when he misjudged a drilled cross from Lukaku.

It was the Denmark international’s first goal in 137 appearances for the club since making his senior debut in 2014.

Midfielder Jorginho converted a penalty to double his side’s lead after Lukaku was brought down as Chelsea continued to dictate the game.