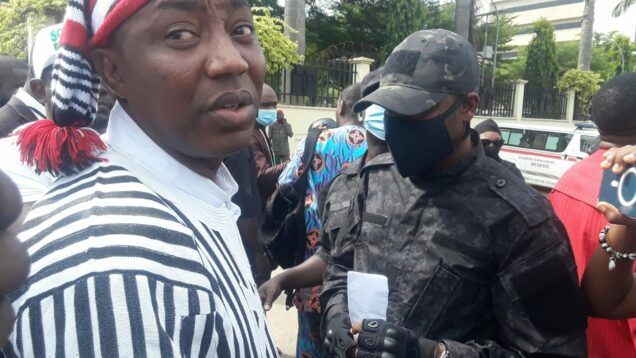 Sowore barred from entering the court

Barrister Tosin Ojaomo was palpably angry Thursday as he was prevented from entering the court room, where Nnamdi Kanu, leader of Indigenous People of Biafra (IPOB) was scheduled for trial in Abuja.

He was not the only one barred by the DSS and other security operatives.

Activist and publisher of Sahara Reporters, dressed in an Igbo traditional outfit, was also barred.

He did not give up easily as he engaged the security men in a hot argument, as to why they were abbreviating his freedom.

A while later, some hoodlums, apparently hired by state agents challenged him and attempted to manhandle him as the police looked on.

Scores of people were barred from accessing the court, courtesy of the usual antics of the security agents.

Lawyers, except those involved in the trial of Kanu and many journalists were barred from going near the court premises by hooded officials of the Department of States Services, DSS, special police and civil defence operatives deployed around the roads leading to the court premises.

The double lanes on Shehu Shagari way and the Ahmadu Bello way, the two expressway to the right and left of the court were reduced to one way resulting in traffic logjam.

Also, hooded DSS operatives were deployed to screen those who want to access the court. Some senior lawyers who were barred from accessing the court engaged in hot arguments with security operatives, but their efforts were futile.

It was learnt that the security operatives told the lawyers that all other matters except that of Nnamdi Kanu have been stood down till 2 pm.