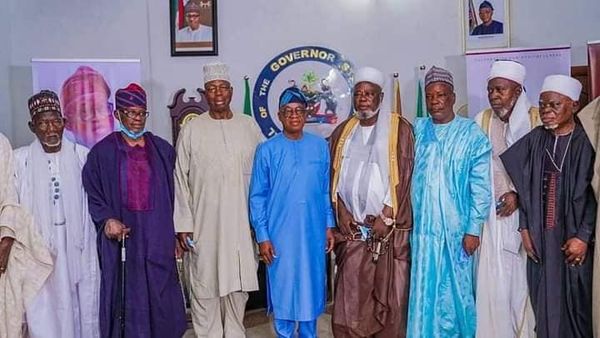 Islamic clerics, under the aegis of Leagues of Imams and Alfa’s in South-west, Edo and Delta, have called on Gov. Gboyega Oyetola to stop the Oluwo of Iwo, Oba AndulRosheed Adewale Akanbi from installing a Grand Mufti for Yorubaland.

The clerics, led by the Chief Imam of Ekiti State, Alhaji Jamiu Kewulere, kicked against the monarch’s plans during a visit to the Osun governor at the Government House, Osogbo on Wednesday evening.

Alhaji Jamiu Kewulere accused the Oluwo of planning to install Sheikh Said Molaasan, as Grand Mufti of Yorubaland which contravened all norms.

The cleric said that the monarch does not have the capacity to install a Grand Mufti as a traditional ruler because the title belongs to the Islamic circle.

They charged the governor to prevail on him to stop the move before it snowballs into another thing.

The clerics also submitted a petition signed by their counsel, K. Odedeji to the Osun State Governor, Osun State Police Commissioner, the State Director of the Department of State Security (DSS).

They held in the petition that the post of grand mufti was meant for respected Islamic scholars that must be appointed by Imams and Alfas.

Governor Oyetola, however, promised the clerics that he will look into the matter and give it the attention it deserved.

The governor said feedback will also be delivered as soon as possible.