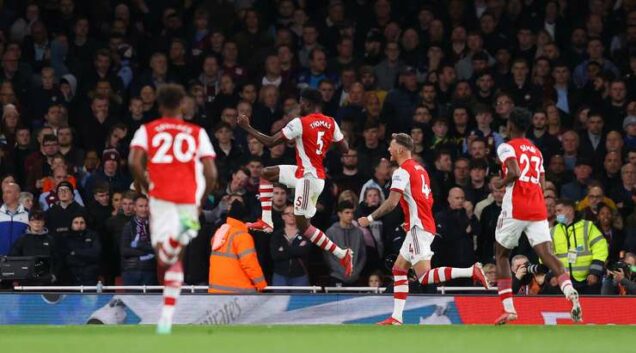 Arsenal beat Aston Villa 3-1 on Friday with an impressive performance at the Emirates Stadium to move ninth on the table.

Defender, Thomas Partey put Arsenal ahead on 23 minutes as he met a corner and displayed his eye for goal, coolly planting a header from close range into the right side of the goal.

The strike missed a penalty, but he was in the right place at the right time to get to the rebound inside the box and gleefully rifled the ball into the middle of the net.

A quick turnover allowed Emile Smith Rowe to mount a one-man counter attack and ended with him scoring with a precise shot from close in that easily beats the keeper, giving the homers 3-0 lead on 56 minutes.

Villa pulled one goal back on 82 minutes.

Jacob Ramsey had collected a precise pass and fired a shot towards the top right corner, bouncing in off the post.