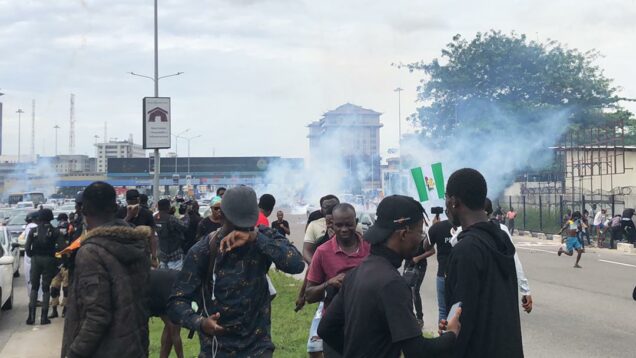 The Lagos State Police Command said it has arraigned 34 suspects arrested during Wednesday’s EndSARS memorial protest at the Lekki Tollgate.

A statement issued by the command’s spokesman, Adekunle Ajisebutu late Thursday night said the planned protest in commemoration of the one year anniversary of EndSARS was carried out by protesters who moved in motorcade through the Lekki toll gate at about 8.00am and that they ended the protest at about 10.00am.

“The protest was peaceful without threat to security except for the brief gridlock experienced by motorists during the period.

“However, at about 1130hrs after the real protesters had left peacefully without any confrontation, hoodlums took advantage of the gridlock with criminal intention to start attacking innocent law-abiding citizens.

“One Shina Edun ‘m’, of Man O’ War Nigeria attached to the Lekki Concession Company was stabbed in the stomach by the hoodlums. The victim was immediately rushed to the hospital where he is currently receiving medical attention.

“Following the criminal act of the hoodlums, the police responded swiftly and dispersed them with minimum force. Consequently, thirty-four of the hoodlums were arrested. Two cutlasses , one hammer, a Jack knife and assorted criminal charms were recovered from them.

“The arrested suspects have been arraigned in magistrate court 5, Oshodi on the same day before Magistrate Israel Adelakun for the offence of conduct likely to cause breach of the peace,” he said.

According to Ajisebutu, “at the end of their trial, two (2) of the accused persons pleaded guilty and were fined in the sum of N10, 000 each. Thirty (30) others pleaded not guilty and were granted bail with one surety and N20,000 in like sum.

“One (1) of them was discharged and acquitted, while one other named Chukwu Chika ‘m’ aged 24 years, who was arrested with a sharp cutlass and assorted charms confessed that he deliberately came to cause violence and mayhem. Subsequently, the court ordered the police to carry out thorough investigation on his case and charge him to court appropriately.

“The Commissioner of Police wishes to express the Command’s profound gratitude to members of the public for their overwhelming support before, during and after the protest,” he said.

He said the CP equally rendered his apology to any media person whose right might have been inadvertently infringed upon while the security personnel were trying to prevent breakdown of law and order.

“Also, the CP assures members of the public that, in line with the policy of the Inspector-General of Police, Alkali Baba Usman, of making the police accountable to members of the public, uphold the tenets and principles of fundamental human rights, and professional in carrying out their statutory duties, training and retraining of the officers and men shall continue to be intensified.

“The Commissioner of Police uses this medium to thank Mr Governor, Babajide Sanwo-Olu and the State Executive Council members for their unalloyed support for security agencies during the protest.

“Equally appreciated are the Youths and other stakeholders for their understanding of the prevailing peace and secure environment in the state.

“The CP notes their cooperation and assistance in not making the state witness the mayhem that characterised last year’s EndSARS protest during yesterday’s one year anniversary. Collectively we shall continue to make the state safer and more peaceful.

“In order to achieve the above, the Command on its own, has resolved to redouble its efforts in providing watertight security and protection of lives and property of all law-abiding citizens in the state,” he stated.