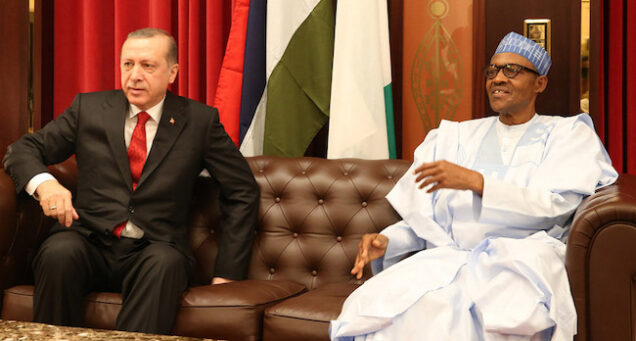 The Muslim Rights Concern (MURIC) has appealed to President Muhammadu Buhari to ignore the allegation made by the visiting Turkish leader, Recep Tayyip Erdogan.

Erdogan had told President Muhammadu Buhari in Abuja that Turkish terrorist organisations that tried to remove him from office are in Nigeria.

However, the founder of MURIC, Professor Ishaq Akintola, in a statement released on Friday described Erdogan’s comment as false.

The statement signed by Akintola reads:

“We heartily welcome the bilateral agreements signed by Nigeria and Turkey as they have the potential to boost economic and military advancement in both countries. However, we take the Turkish president’s allegation that there are Turkish terrorists in Nigeria with a pinch of salt. It is false, baseless and of no consequence whatsoever.

“We are aware of the existence of Boko Haram and ISWAP terrorists in the country but we reject the attempt to label innocent Turkish citizens as terrorists just because there is a political difference between them and their president.

“Nigerian opposition groups are spread all over Europe and America but President Buhari does not label them as terrorists. Neither does he tell his hosts to haunt them. Instead, he treats all Nigerian citizens at home and in diaspora as his own children. This is one area President Erdogan of Turkey needs to look into. He derailed by veering into the issue of opposition members from his country who reside in Nigeria. He should have ignored them.

“We acknowledge Erdogan’s role as a leading mouthpiece of the Muslim world and a stout defender of Islam particularly against Western stigmatization. But that does not confer on him the right to label the opposition in his country as terrorists and to haunt them all over the place. Erdogan should stick to what we know him for as the unrelenting defender of world Muslims.

“Neither should Erdogan’s humongous Muslim hero image becloud or diminish MURIC’s commitment to protecting Allah-given fundamental human rights of Muslims in Nigeria, be it individual or group. This is where the issue of protecting the rights of members of HIzmet in Nigeria comes in.

“These people are our fellow Muslims. It does not matter whether they are foreigners or Nigerians. Prophet Muhammad (SAW) said. ‘A Muslim is a brother to a fellow Muslim’ (al-Muslim akhul-Muslim). Interestingly enough, we have not heard of their involvement in any violent activity since their sojourn in this country.

“What we know of them is that they build primary and secondary schools, universities and hospitals. They also engage in humanitarian services, assisting poor Muslims to meet religious obligations like hajj and sacrificial animals. They have been in this country for more than 20 years (even before Erdogan became Prime Minister) and some of the institutions established by them in Nigeria are two decades old already. A coup which allegedly occurred in Turkey five years ago while these people were still in Nigeria should not be hanged on their necks.

“We can understand the sentiment felt by any Muslim who regards Erdogan as a hero. We also acknowledge that fact but MURIC is a human rights group trained to identify and focus on infringements of Allah-given fundamental rights of Muslim individuals and groups. We cannot allow ourselves to be carried away by emotions of hero-worshipping. Our rights are our rights and Muslim rights are Muslims rights.

“Besides, Prophet Muhammad (SAW) in his hadith advocated kindness to guests. He said, ‘Anyone who believes in Allah and the last day should honour his guest’. By inference, Turkish citizens in Nigeria and indeed all foreigners in this country are our guests and we should treat them with kindness. We should also protect them.

“This is what MURIC is doing regarding members of Hizmet in the country and we will not stop doing so until we see evidence of their involvement in terrorist acts. It is evil to label innocent people as terrorists. We will not subscribe to such diabolical act. We know how it feels to be falsely accused. We have been labelled as terrorists before. Who feels it knows it. We are determined to stand by these innocent Muslims.

“Why is MURIC going so far? We are doing all these because Allah commands Muslims to forbid evil (Glorious Qur’an 3:104). The Qur’an describes Muslims as a people who enjoin righteousness and forbid evil (3:110). Prophet Luqman commanded his son to forbid evil (31:17) and Muslims are reminded by their Imams during the khutbah every Friday to avoid evil (16:90). The fact is that anyone who protects our human rights is fighting or forbidding evil and anyone who forbids evil in any form is a human rights activist.

“It is to this extent that we must take a critical look at the sufferings of those who have been denied the right of return to their countries and those who have been disallowed from joining their families. MURIC as a human rights group may recognise the heroic deeds of Erdogan but at the same time we will be failing in our duty if we do not protect fellow Muslims who are facing persecution.

“To stay in character, MURIC also has a duty to speak up for Erdogan tomorrow if any Western country targets him for stereotyping. Erdogan should continue to confront Western countries who demonise Islam instead of persecuting powerless humanitarian workers and destroying products of decades of their hard work.

“It is fashionable these days to label political opponents and perceived enemies as terrorists. It is all in an effort to manufacture legitimate allegations which can be used to destroy opponents and most despots do this nowadays. It is a strategy used by opportunists to destroy the opposition. They give the dog a bad name in order to hang it.

“In May 2021 Algeria labelled the opposition (MAK) as a terrorist group. Blacks involved in Black Lives Matter protests were called terrorists by Donald Trump. A leading scholar of terrorism, Brian Jenkins, pulled the rug from under despots when he observed in 1981 that terrorism ‘is what the bad guys do’. In other words, terrorism is anything the opposition does. Like Trump, like Erdogan.

“Nonetheless, FG deserves accolades for securing eight bilateral agreements with Turkey. Some of the agreements include security, energy, mining and hydrocarbons. We advise FG to key into these pragmatic gains of the visit rather than dissipate energy on a wild goose chase. FG should ignore the allegation because Erdogan has no single shred of evidence. It is false, baseless and of no consequence whatsoever.”