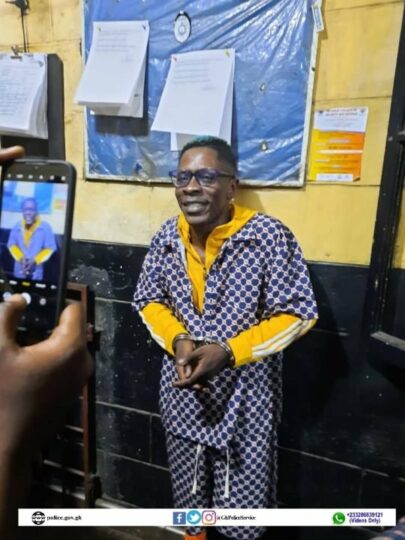 Ghanian rapper, Shatta Wale and three others have been remanded in police custody for one week after pleading “not guilty” to an allegation of spreading false information.

The suspects were arraigned before the court following the claim of the singer being shot in Accra’s East Legon.

News had earlier made rounds that the singer was shot at East Legon in Ghana. The singer’s representative Nana Dope further posted a message via his social media account claiming that Shatta Wale had been rushed to the emergency ward of a hospital.

This triggered a reaction from the Ghanaian police as they noted that through a Facebook post that they were in search of the artiste whose whereabout was unknown at the time.

Shatta Wale and his alleged accomplices, Kojo Owusu Koranteng, Idris Yusif, and Eric Venator pleaded not guilty to the charges of publication of false news and causing fear and panic, after being arraigned in court today October 21.

His alleged accomplices were also accused of aiding and abetting crime. Shatta Wale and his entourage who have already been detained by police for two nights after being arrested on Tuesday October 19.

The four people are scheduled to appear in court again on October 26, 2021.

In a Facebook post prior to his arrest on Tuesday, the singer apologized to his fans and those affected by the prank.