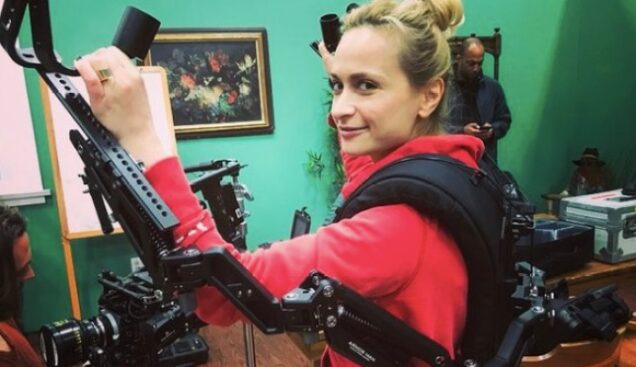 Cinematographer Halyna Hutchins accidentally shot dead by 63 year-old Hollywood star Alec Baldwin on the set of Baldwin’s movie Rust, has been remembered as a ‘brilliant talent’ and a rising star.

The 42 year-old was injured when a prop gun was discharged by Baldwin on Thursday, October 21.

The mother-of-one was taken to the University of New Mexico Hospital by helicopter, and was pronounced dead at the hospital.

Hutchins was born in the Ukraine and grew up on a Soviet military base in the Arctic Circle before attending Kyiv National University.

After graduating with a degree in international journalism, she worked as an investigative journalist for British documentaries in Eastern Europe.

However, Hutchins’ true passion lay in filmmaking, and she moved to Los Angeles, where she got work as a production assistant and a grip electric.

She also shot her own short films, inspired by cinematographers including Christopher Doyle and Sergey Urusevskiy.

On the advice of cinematographer Robert Primes, Hutchins enrolled the filmmaking MFA programme at the American Film Institute Conservatory in 2013 and graduated two years later.

In 2018, Hutchins was one of eight female cinematographers selected for the inaugural 21st Century Fox DP Lab, and in 2019, she was chosen as a Rising Star by American Cinematographer magazine.

Hutchins went on to work on films including horrors The Mad Hatter and Darlin’ and police drama Blindfire, and the BET+ series A Luv Tale: The Series.

She also worked on the Joe Mangianello mystery thriller Archenemy, which premiered at Beyond Fest 2020 and received a nomination at the Sitges International Film Festival.

Manganiello wrote on Instagram: ‘I woke up to the messages and read the news and I am in shock. I was so lucky to have had @halynahutchins as my DP on Archenemy. She was an absolutely incredible talent and a great person. She had such an eye and a visual style, she was the kind of cinematographer that you wanted to see succeed because you wanted to see what she could pull off next. She was a fantastic person. There was no amount of pressure she couldn’t handle. She was a great collaborator and an ally to anyone in front of her camera. Everyone who knew her was rooting for her.

‘I can’t believe that this could happen in this day and age… gunfire from a prop gun could kill a crew member? This is a horrible tragedy. My heart goes out to her family and especially to her son. I am so sad today for everyone who knew her and worked with her…’

Archenemy director Adam Egypt Mortimer also tweeted: ‘I’m so sad about losing Halyna. And so infuriated that this could happen on a set. She was a brilliant talent who was absolutely committed to art and to film.’

Two days before her death, Hutchins had reposted a cast and crew picture from Santa Fe, New Mexico, as they supported the IATSE trade union action.

She also shared a video of herself horse-riding, and wrote: ‘One of the perks of shooting a western is you get to ride horses on your day off:).’

The Santa Fe Police Department is investigating the incident, and a statement said no charges had been filed.