At Fayose son's wedding: Makinde says no one should die for politicians 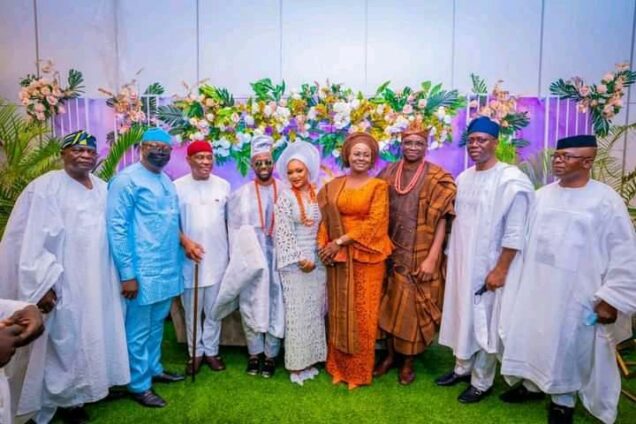 Governor Seyi Makinde on Saturday reiterated his belief in politics without bitterness, warning that no one should die supporting politicians.

Makinde said this at the wedding ceremony of one of the sons of former Ekiti State governor and chieftain of the Peoples Democratic Party (PDP), Mr. Ayo Fayose, held in Lagos.

The wedding was attended by Governor Kayode Fayemi and former Governor Segun Oni, both political rivals in the last APC governorship primary in Ekiti.

Makinde, Wike, Oyinlola, Fayose and Oni all belong to PDP, while Fayemi is of the APC.

The assembly of the politicians must have inspired Makinde to advise individuals fighting over politics and religion to have a rethink.

He said none of the two is worth losing one’s life fighting over.

Makinde also said that the political rift between him and Fayose has already been put behind them.

Makinde, who congratulated the Fayose and Abdul families on the occasion of their children’s wedding, prayed for a blessed union for the new couple.

He equally pointed out that the wedding, apart from bringing together politicians, also broke the religious barrier, as a Christian and a Muslim family allowed the solemnisation of matrimony between their children.

“I want to congratulate Olamide and Oluwalonigba. This is the beginning of a journey and I pray that it will produce male and female children.

“I want to believe that you saw me join the Ekiti people when they were told to ask for their wife. I stood up and came with them.”

Makinde, who urged politicians to play politics devoid of violence or disharmony, said as the country moves towards 2023, politicians must learn that politics is not worth losing one’s life over.

“If you look at the former governors in Ekiti State – Governor Segun Oni, Governor Ayo Fayose and the incumbent Governor Kayode Fayemi, they have governed the state at one time or the other but they were not in the same party. So, those of you who want to die because of us politicians, be careful.

“Politics is not something that should cause anybody to lose his or her life. We are moving towards the electioneering period, and I just want to use this opportunity to appeal to you all.

“If you also look at this marriage, the bride and groom are from Christian and Muslim families. So, people who also want to always fight on religious grounds should have a rethink.”