How N500k seed to Oyedepo changed my life - Ibiyeomie 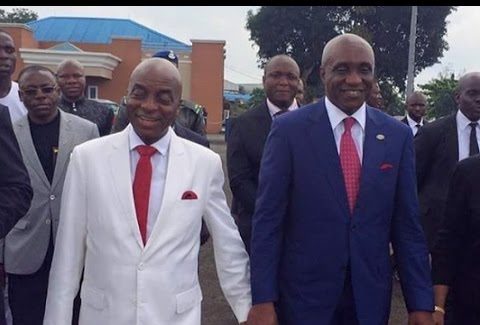 Ibiyeomie said the amount was small but it was the biggest he could achieve at the time.

He said, “In the year 2000, I will never forget. I went to see my own father. We were trying to find our feet in ministry. We went with one small amount of money.

“Right now, nothing can make me sow that kind of money. But in the year 2000, five hundred thousand naira (#500,000) was our biggest. It will be like carrying five hundred million naira now to sow. So, coming out from Bible School, we were still battling to find our feet in ministry.

“So, we went to visit. He knew where we were coming from; he knew our size. You know there are people who will give me two thousand (#2000) and the kind of blessing they will get will be more than those that will give me one million (1,000,000), depending on your size.

Ibiyeomie further said Oyedepo prayed and gave him a special blessing that made him realize he will never struggle in his own ministry.

“We dropped it and I can never forget the kind of prayers he prayed which I can’t tell you because it will stir up too much jealousy.

“After we were done, he said kneel down my son. My wife and I knelt down. He moved backward and adjusted his belt and pronounced blessings….oh my God!

“Even Satan knew that there was no way….that was the day I knew that in ministry, I won’t struggle,” he added.

Ibiyeomie also said Oyedepo pronounced some words, “but I won’t say them because the words are too dangerous.

“Just like the way I will say some things about you and some people will be envious. He pronounced those words.

“See, words have power. Jesus used words to bring Lazarus back alive. Every time words are spoken, you rule your world.

“He never gave me material things. What he gave to me was a blessing,” he stated.