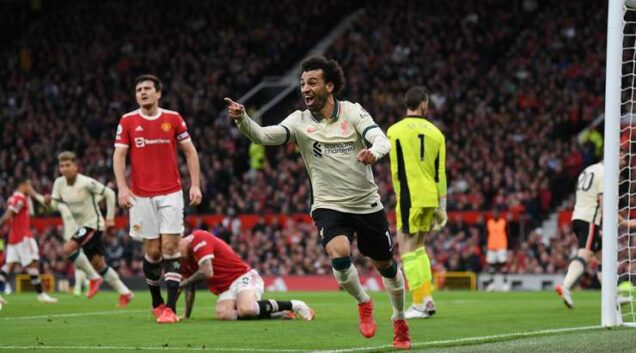 By the end of first half, the visitors were already 4-0 up with a comprehensive dominance of the game.

Liverpool opened scoring five minutes into the game. Naby Keita latched on to a perfect pass and fired an excellent low shot inside the right post.

Seven minutes later, Liverpool double their lead from Diogo Jota. He connected with a pass inside the box and slammed home inside the left post.

It was 3-0 on 38 minutes as Salah took charge. He received a delightful pass inside the box and smashed a precise shot inside the right post.

The Liverpool striker made it 4-0 on first half added time, as he latched on to a precise pass inside the box and sent in a superb strike that found its way into the bottom right corner.

Salah completed his hat-trick on 50 minutes after receiving a pass and unleashed a shot straight into the bottom left corner.

Cristiano Ronaldo got one back for United but VAR ruled it offside.

United’s woes were compounded as Paul Pogba was sent off on 60 minutes of play for a dangerous challenge on Keita.