Wasiu Ayinde and his disrespect of the Oluwo of Iwo 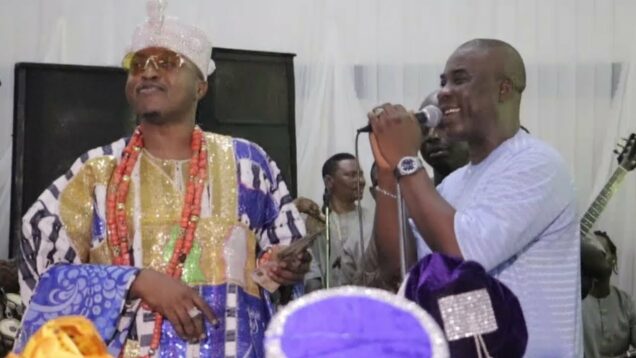 Many a time, we have learned about the traditional weight of Yorubaland and how much their culture is valued.
As a typical Yoruba man, I learned manners from my parents who are the strict enforcers of moral values and cultural heritage, my father is not a fan of speaking the lingua franca to his wards and this has been passed to his children as we do not feel it’s right to bring up our children in the English language.

The squabble which has since been ensued about the viral video that featured Oluwo Of Iwo, Elegusi of Ikate, and King Wasiu Ayinde K1 is up for decent assertion and correct judgemental value.

Although the video connotes there is an existing friendly rapport among all the parties involved, the video seems incomplete before various judgments from all and sundry.

King Wasiu Ayinde Marshal according to various unconfirmed comments is typically arrogant and feels too big, even if the assertion is true, did he portray an iota of rudeness in the video?

The veteran singer who is a titleholder in Yorubaland should know more about the cultural value, irrespective of the closeness of relationship anyone has with a Yoruba king, due respect must be accorded to the Monarch in public till the go behind the camera where they can perform all forms of their usual friendliness.

The Mayegun of Yorubaland, K1 seems intoxicated and was unconscious in the video, it is however believed that when you’re drunk, such attitude is inevitable.

But does being drunk in public is good for the personality of his caliber and social strata? Even if he was drunk, he was still sensible to Accord respect to Ọba Saheed Elegusi in a virtuous manner but for reasons best known to him, he should address Oluwo as his ally, alleging him of not inviting him to a program in a manner that is so uncomfortable with every sane Yoruba sons and daughters.

All traditional monarchs should reinforce the old restrictions or limitations on someone’s activities or freedom towards them. This will surely reduce the excesses of their arrogant subjects.

All things considered, if K1 is truly rude, why should he have honored the other king and not Oluwo? The one according to hierarchy is far lower than Oluwo of Iwo even though the former rules a more sophisticated empire than the latter.

According to a commentator, It’s certainly a wanton disrespect and disregard for the throne. He obviously was roiling in alcohol but that didn’t prevent him from according due respect for Elegushi but perfunctorily with utmost nonchalance greeted our custodian like a typical drinking buddy.

It sucks and rubs it in for me at that point. As if that wasn’t enough the sitting arrangement was beggarly and undeserving of a first-class traditional ruler.

Oluwo sought popularity in a few wrong manners, he rolled and dined with people to gain attention and has admitted to being controversial on many occasions.

Although, the Oluwo stool is one of the most respected in the Yoruba race, the occupier in so many times has been a center of many unnecessary issues such as disrespecting his fellow kings and elders of his community which has caused division as many support and others against him in the empire.

The old adage of the tribe that says there is no honor and dignity for a king without a queen might not be wrong in its entirety, even if one is not a king but has achieved certain age without a wife, it is a sign of irresponsibility in the Yoruba world.

Oba Akanbi after the infamous separation with his Jamaican wife has failed to give the Iwo kingdom a queen, truly unbefitting of a king of his caliber and social strata. He is bound to be a subject of ridicule which his subjects will surely frown at to protect their tradition.

If at all Wasiu Ayinde should act too friendly and greet anyone skittishly in the video, it should not be anyone but the Elegushi who has been his friend since childhood but he clearly bowed and accorded a greeting worthy of a noble king, and not he got to meet just sometime before his coronation but deliberately, and proud to drag on the unpaved, coarse floor, face down.

Without further ado, King Wasiu probably meant no harm but should have been more upright in dealing with a king in public as a typical Yoruba man.

Oba Akanbi Telu should create a distance between certain names, avoid seeking publicity by all means. This, as a matter of fact, should have gained him more support during this brouhaha, but instead, getting blamed for self-infliction simply because of his past brawls on and off his domain.