Buhari: eNAIRA safe, will boost economy by $29bn in 10 years 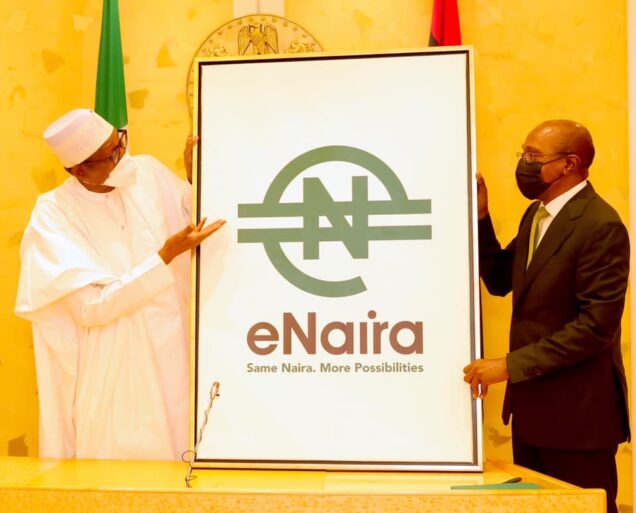 President Muhammadu Buhari has said adoption of the Central Bank Digital Currency (CBDC) otherwise known as eNaira and its underlying technology, called block chain, can increase Nigeria’s GDP by $29billion over the next 10 years.

Speaking at the official launch of the eNaira in Abuja on Monday, the President also declared that the introduction of the digital would enable the government to send direct payments to citizens eligible for specific welfare programmes as well as foster cross border trade.

He also ssured Nigerians of the safety and scalability of the CBDC system, adding that the journey to create a digital currency for Nigeria began sometime in 2017.

”Let me note that aside from the global trend to create Digital Currencies, we believe that there are Nigeria-specific benefits that cut across different sectors of, and concerns of the economy.

”The use of CBDCs can help move many more people and businesses from the informal into the formal sector, thereby increasing the tax base of the country,” he said.

The President said with the launch of eNaira, Nigeria has become the first country in Africa, and one of the first in the world to introduce a Digital Currency to her citizens.

He commended the Governor of the Central Bank, Godwin Emefiele, his deputies and the entire team of staff who worked tirelessly to make the launch of Africa’s first digital currency a reality.

On the safety of the CBDC system, the President said enough work has been done to ensure that it is foolproof.

”Work intensified over the past several months with several brainstorming exercises, deployment of technical partners and advisers, collaboration with the Ministries of Communication and Digital Economy and its sister agencies like the Nigerian Communications Commission (NCC), integration of banking software across the country and painstaking tests to ensure the robustness, safety and scalability of the CBDC System, ” he said.

The President also used the occasion of the unveiling of the eNaira to painstakingly explain to Nigerians why he approved the use of the digital currency.

”In recent times, the use of physical cash in conducting business and making payments has been on the decline. This trend has been exacerbated by the onset of the COVID-19 pandemic and the resurgence of a new Digital Economy.

”Alongside these developments, businesses, households, and other economic agents have sought for new means of making payments in the new circumstances.

”The absence of a swift and effective solution to these requirements, as well as fears that Central Banks’ actions sometimes lead to hyperinflation created the space for non-government entities to establish new forms of “private currencies” that seemed to have gained popularity and acceptance across the world, including here in Nigeria.

”In response to these developments, an overwhelming majority of Central Banks across the world have started to consider issuing digital currencies in order to cater for businesses and households seeking faster, safer, easier and cheaper means of payments.

”A handful of countries including China, Bahamas, and Cambodia have already issued their own CBDCs.

”A 2021 survey of Central Banks around the world by the Bank for International Settlements (BIS) found that almost 90 per cent are actively researching the potential for CBDCs, 60 percent were experimenting with the technology and 14 per cent were deploying pilot projects.

”Needless to add, close monitoring and close supervision will be necessary in the early stages of implementation to study the effect of eNaira on the economy as a whole.

”It is on the basis of this that the Central Bank of Nigeria (CBN) sought and received my approval to explore issuing Nigeria’s own Central Bank Digital Currency, named the eNaira,’’ he said.

Equally, the Nigerian leader noted that his approval was also underpinned by the fact that the CBN has been a leading innovator ‘‘in the form of money they produce, and in the payment services they deploy for efficient transactions.’’
He noted that Nigeria’s apex bank has invested heavily in creating a Payment System that is ranked in the top ten in the world and certainly the best in Africa.

”This payment system now provides high‐value and time‐critical payment services to financial institutions, and ultimately serves as the backbone for every electronic payment in Nigeria.

”They have also supported several private‐sector initiatives to improve the existing payments landscape, and in turn, have created some of the world’s leading payment service providers today,’’ he said.

In his remarks, the CBN Governor explained that eNaira is Nigeria’s CBDC and it is the digital equivalent of the physical Naira.

”As the tagline simply encapsulates, the eNaira is the same Naira with far more possibilities. The eNaira – like the physical Naira – is a legal tender in Nigeria and a liability of the CBN. The eNaira and Naira will have the same value and will always be exchanged at 1 naira to 1 eNaira,” he said.

Emefiele added that the CBN has given careful consideration to the entire payments and financial architecture and has designed the eNaira to complement and strengthen these ecosystems and has implemented secure safeguards and policies to maintain the integrity of the financial system.

He pledged that there would be strict adherence to the anti-money laundering and combating the financing of terrorism (AML/CFT) standards in order to preserve the integrity and stability of Nigeria’s payment system.

According to Emefiele, since the eNaira platform went live, there has been overwhelming interest and encouraging response from Nigerians and other parties across the world with over 2.5 million daily visits to the website.

He listed the following milestones:

The CBN governor also used the occasion to commend President Buhari for making history, yet again, with the launch of the eNaira – the first in Africa and one of the earliest around the world.

He also dispelled fears on the nation’s foreign reserves, saying the reserves are strong and getting stronger by the day.

”Mr. President, as you make ground breaking reforms, there have been continuing debate on the true value of the Naira. Rather than worry today on the direction of the exchange rate, let us take a step back and analyze how we got here in the first place.

”Please recall that since the advent of the International Monetary Fund (IMF) led Structural Adjustment Programme (SAP) in 1986, and the introduction of the Second Tier Foreign Exchange (SFEM) market, the Naira has been on a one-way free fall from parity to the US Dollar in 1984 to over N410/USD today.

”Some 35 years later, we have not been able to achieve the many promises and objectives of that programme.

”Instead, what we have seen is widespread import dependency, which has wiped out most of our production and manufacturing bases and exported all our jobs in the process.

”What has happened to the massive textile factories across our nation such that we import almost all cotton products when we are rich in cotton?

”What has happened to our vehicle assembly plants across the nation such that we import most vehicles and have become a massive dumping ground for dying second-hand vehicles?

”Under your leadership, Mr. President, we must stop this decline for good! We must return to massive homemade production; we must get our people working again. We must create the economic environment for massive domestic production and significant non-oil exports.

”As custodians of your national reserves, let me first assure you that there is no cause for alarm. Our FX reserves are strong and indeed getting stronger by the day, crossing the 40 billion USD mark, and is one of the highest in Africa – and growing.

”But we cannot fritter our reserves away on cheap imports and currency speculators. We must return to an employment-led growth anchored on productivity and rewarding producers of local goods, services, innovation and new technologies.

”If you consume cheap imports and export our jobs, we will make you pay dearly; but if you produce locally – with little or no foreign inputs beyond machinery, we will support you, and the markets will reward you abundantly,” he said.

In addition to all policies and actions of the CBN to support the economy especially through the trying times of COVID-19, Emefiele announced a new financial instrument titled “The 100 for 100 PPP – Policy on Production and Productivity”, which will be anchored in the Development Finance Department under his direct supervision.

He explained that under this policy the CBN would advertise, screen, scrutinize and financially support 100 targeted private sector companies in 100 days, beginning from 01 November 2021, and rolling over every 100 days with new set of 100 companies, whose names will be published in National Dailies for Nigerians to verify and confirm.