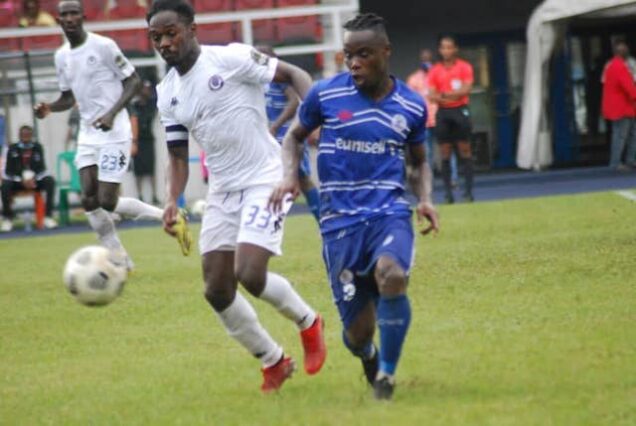 Nigeria’s sole representatives in the 2021/2022 CAF Champions League, Rivers United, on Sunday crashed out after succumbing to a lone-goal defeat in the hands of Sudan’s Al Hilal Omdurman in Egypt.

The Sudanese side booked a slot in the group stages after a hard earned 1-0 victory over Rivers United.

Al Hilal went through 2-1 on aggregate with the first-leg away from home having ended in a 1-1 draw.

Playing their home matches at the Suez Stadium in Egypt, Al Hilal went all out to secure their place in the groups and they did so as early as the third minute of the game.

Yaser Muzamil scored the lone goal of the match as they held on to the vital scoreline all game with Rivers United now dropping to the Confederation Cup.

In other results, 2016 Champions Mamelodi Sundowns, Esperance du Tunis, Guinea’s Horoya AC, Morocco’s Wydad Club Athletic and the Algerian duo of CR Belouizdad and ES Setif all made it to the group stages of the competition.

Five-time African champions Zamalek SC on Saturday became the first team to qualify for the group stages of the CAF Champions League, after a 4-0 drubbing of Kenyan champions Tusker FC ,at the Borg El Arab Stadium in Alexandria, Egypt.

At the Loftus Versfeld Stadium in Pretoria, Mamelodi Sundowns beat DR Congo’s AS Maniema 2-0 on the afternoon.

The victory gave them a a 4-2 on aggregate win to progress to the group phase.

Lyle Lakay and Peter Shalulile scored the goals in either half for Masandawana as they progressed to the group stages for the seventh consecutive time.

Lakay broke the deadlock in the 23rd minute when he curled a brilliant freekick beyond the wall.

Sundowns doubled their lead in the 53rd minute when Namibian international Shalulile reacted quickest after the Maniema keeper had spilled a cross from Lakay.

Despite concerted pressure from the visitors, the South Africans comfortably saw off the scoreline to sail through.

In Rades, four-time champions Esperance du Tunis endured tough resistance from Libyan champions Al Ittihad before winning 1-0 and progressing to the group phase. The first leg between the two sides had ended barren.

The hosts got the solitary goal of the match in the 63rd minute through Nassim Ben Khalifa put the ball into the net.

The visitors had however to play the final 14 minutes plus additional time with a man less after Mouad Ellafi was sent off on a straight red card.

The numerical superiority worked in Esperance’s advantage as they saw off the slim lead to progress.

In Conakry, Guinea champions, Horoya AC, made it to the group stages after beating Stade Malien 2-1 on the afternoon and 3-1 on aggregate.

The Guineans had won by a solitary goal in the first leg in Bamako and completed the job at home.

Dramane Nikiema gave Horoya the lead with a bullet of a strike, hitting a scorching shot from almost 40 yards out.

They, however, put the game to some distance when Salif Coulibaly scored the second in the 58th minute with a strong header from Baffour Sebe’s corner to stretch the game to 3-0 on aggregate.

Coulibaly, however, almost turned from hero to villain when he turned the ball into his own net in the 72nd minute, but Stade Malien’s comeback could not run the full length.

In Algeria, hosts ES Setif overturned a 3-1 deficit they suffered in Mauritania last weekend to beat FC Nouadhibou 2-0 and progress to the group stage on the away goal rule.

The Mauritanian champions had come from a goal down to win 3-1 at home in Nouakchott and were high in confidence that another spirited performance in North Africa would earn them a ticket to the group stage,

However, they could not complete the job as Setif were more determined.

They had to wait till six minutes from time before securing qualification through Khalil Darfalou’s goal.

It was same script different cast as fellow Algerians CR Belouizdad also progressed on the away goal rule after winning 2-0 in the second leg at home to overturn a 3-1 deficit from the first leg.

Chouaib Keddad gave the hosts an early third minute lead, one till they kept till halftime.

They had lost the first leg by a solitary goal in Accra, but were not ready to make the same mistake twice.

At home, Wydad were emphatic from the first whistle.

Within the opening 20 minutes, it was 3-0 and the tie now looked to be going away when Achraf Dari scored the third.

Yahya Jabrane converted a penalty in the 36th minute as the home side went to the breather with a healthy four goal cushion.

In the second half, they added more with Ayoub El Amloud scoring the fifth goal in the 47th minute before Msuva completed his brace in the 61st minute.

The Phobians pulled one back with six minutes left, but it was all for statistics as the damage was all long done.