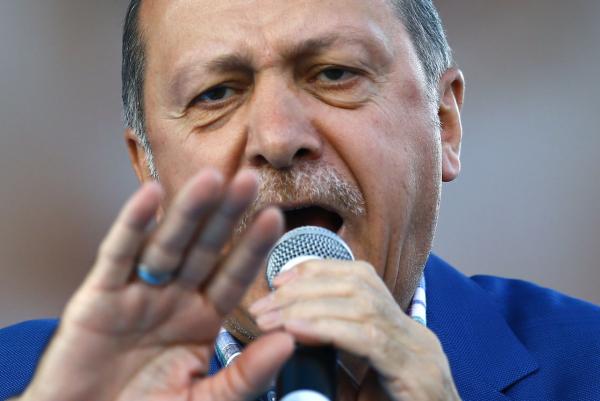 Turkish President Tayyip Erdogan has withdrawn the threat to expel ambassadors from the U.S. and nine other Western countries.

His U-Turn followed the Twitter statement b the United States embassy that they abide by a diplomatic convention not to interfere in a host country’s internal affairs, state-run media said.

The statements were made almost simultaneously on Twitter as Erdogan entered a Cabinet meeting to discuss expelling ambassadors from 10 embassies, a move that would open Turkey’s deepest diplomatic rift with the West in his 19 years in power.

The statements were seen to cool tensions after Erdogan said at the weekend he had ordered the envoys to be declared “persona non grata” for calling for the release of Osman Kavala, a philanthropist detained for four years on charges of financing protests and involvement in an attempted coup.

“The United States notes that it maintains compliance with Article 41 of the Vienna Convention on Diplomatic Relations,” the U.S. Embassy said on Twitter.

State-run Anadolu news agency, citing sources in the presidency, reported that Erdogan had “welcomed” the statements.

Anadolu and state broadcaster TRT described the statements as “a step back” by the embassies.

“Diplomatic missions continuing their work by abiding by this principle will always be welcomed in terms of improving ties between their countries and ours,” Omer Celik, spokesman for Erdogan’s AK Party, said of the Vienna Convention article cited by the embassies.

Russian news agency Sputnik said Erdogan said that the crisis with the diplomats has been resolved.

Now that the ambassadors appeared to have taken “a step back”, they will not be expelled over their appeal to release Osman Kavala, the Turkish president said.

He also voiced hopes that the diplomats would be more careful with their statements about Turkey in the future.

Erdogan’s weekend order had not yet been implemented by the Foreign Ministry.

In response to Monday’s developments, the Turkish lira rallied after earlier hitting an all-time low of 9.85 to the U.S. dollar, and was at 9.585 at 1457 GMT. It has lost almost a quarter of its value this year.

The crisis over the expulsion of the ambassadors “has been resolved,” Huseyin Bagci, an international relations professor at the Middle East Technical University (METU), told broadcaster Haberturk.

A diplomatic source said the embassies were “cautiously hopeful” but added it was unclear what Erdogan would ultimately decide to do.

The 10 ambassadors represent NATO allies, trade partners and members of the European Union, which Turkey aspires to join despite widening differences with the bloc.

Unal Cevikoz, an opposition Republican People’s Party (CHP) lawmaker and former Turkish ambassador, said on Twitter: “It is understood that efforts to prevent the 10 ambassadors being declared ‘persona non grata’ have yielded results. The success of diplomacy was seen once again.”