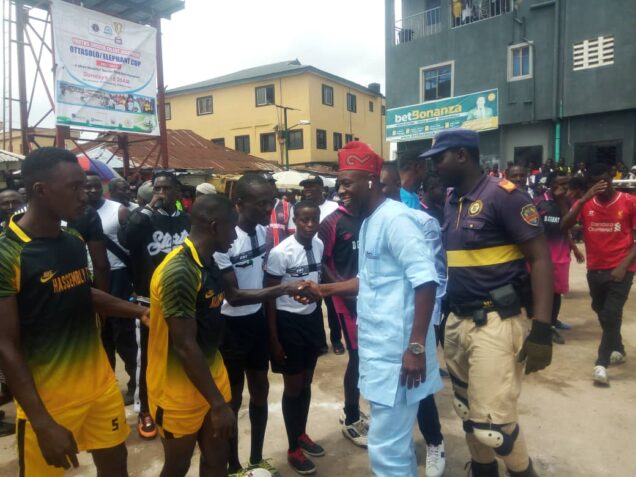 Ogundimu, the Grand Patron of the Elephant Cup, stated this on Sunday during the 2021/2022 opening matches of the Ottasolo Elephant Cup league at Ashade Palace Ogba in Agege, Lagos.

“The yearly Elephant Cup league is not a new development in Agege, it has been in existence for a long time and the government has determined to ensure sporting activities are upgraded to encourage the youths at the grassroots levels.

“We urge the youths to take advantage of the development because the sporting activities at the grassroots have been budgeted for at federal and state levels for the benefit of the youths.

“We advise the youths to maintain peace during the matches and exercise the spirit of sportsmanship throughout the league period,” he said.

Mr. Felix Ajanaku, the Chairman of the Elephant Cup Football Committee, thanked the 2021/22 sponsors Ottasolo and organizers for their steadfastness in organizing the league for over 20 years.

“We thank God for his grace and for the opportunity given to us to continue the match for over 20 years of its existence.

“Ottasolo Elephant Cup have better competitions this year because one of our sponsors is a club owner at Nigeria Premier League which is an added advantage to our players to showcase their talents to the world.

“We have better competitions this year, I advise the players and their supporters to shun any form of violence during and after the matches in the community,” he said.

“We also commend the security officials on ground for being professional in handling the crowd during and after the matches,” he added.

“Because the crowd here is enormous, and we thank God that everything is always under control during and after the matches,” he said.

Mr. John Ajomale, the General Manager, Ottasolo International Football Club, one of the sponsors of 2021/22 Elephant Cup said that Ottassolo is all about grassroots football.

According to him, Ottasolo has been developing grassroots football in various communities for a long period of time.

“Being a footballer himself, he has raised numbers of youths at the grassroots levels to be professional footballers in both local and international leagues,” he said.

The opening matches were between D’ Great FC and Assembly FC with D’ Great defeating their opponents 4-1, while Bit FC defeated Peace FC by 5-3 in their first match.