Wike laments: Nigeria has never been so badly governed 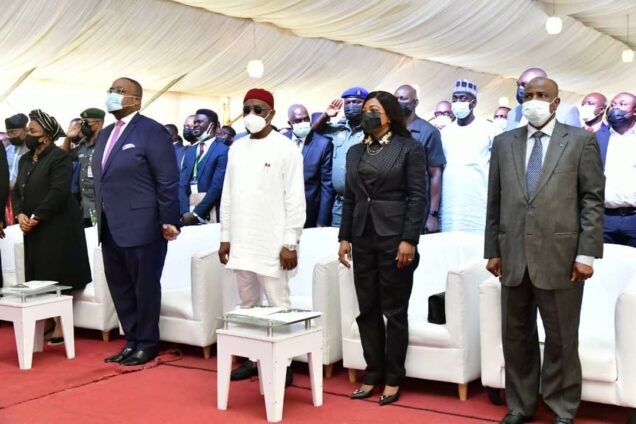 Governor of Rivers State, Nyesom Ezenwo Wike has lamented that Nigeria has never been so badly governed in her political history as it has been in the past six years under the All Progressives Congress, APC administration of President Muhammadu Buhari.

Wike who spoke on Monday at the 61st Annual General Conference of the Nigerian Bar Association (NBA) Conference in Port Harcourt added that the federal government is woefully failing in its basic duties of providing for the wellbeing and security of its own citizens.

He therefore urged Nigerian lawyers to engage in judicial activism as a deliberate measure to addressing the slow dispensation of justice, and attempts to stifle the rights of the citizenry.

Governor Wike said no excellence can be achieved in the nation’s judicial system when judges lack the courage to enforce the law with equal measure because they are constantly under some form of political intimidation or pressure to please vested interests.

He wondered why the NBA has continued to focus less on promoting and fighting for the values of good governance, democracy, judicial independence, human rights and the rule of law when there is urgent need for them to do so.

“Never in our political history has Nigeria been so badly governed and denied of good governance with the federal government woefully failing in its basic duties to provide for the wellbeing and security of its own citizens as we have experienced in the last six years.

“On a daily basis the economic, social and political rights, including the rights to personal security, freedom of speech, association, dissent and peaceful protests, as well as the right to personal liberty are being violated with impunity by the present central administration and its security apparatus.

“The invasion on personal liberty has been brazen and indiscriminate, such that even judges of the superior courts, including Supreme Court justices, have in the recent past been victims of midnight assaults on their premises and subjection to unlawful arrests and imprisonments.

“Lately, the new devious trend is to tag security risks to innocent Nigerians and opposition elements and use the Immigration Authority to seize their international passports without a prior court order.”

Governor Wike said it is not enough for the Federal Government to issue Executive Order 10 and do nothing more pragmatic about resourcing the judiciary to the fullest possible extent, including enhanced judicial welfare and conditions of service.

According to him, there is need to seek judicial interpretation of the Executive Order 10 because, in itself, it is an oppressive erosion of the powers and autonomy of the sub-national governments to administer their own judicial budgets in line with prevailing economic indices.

“It is for similar reasons of strengthening fiscal federalism that we are in court to determine the proper authority, under our Constitution for imposing and collecting the Value Added Tax in our country.

“These are very nationally sensitive issues and Nigerians are eagerly waiting for the final outcome of the judicial process. We therefore wonder why the Supreme Court is not giving accelerated hearing to these matters and respectfully request that this should be done in the national interest.”

Speaking further, Governor Wike said it was time for everybody to work collectively towards building a strong legal system that is well-resourced, independent and effective in the administration of justice.

He said his administration has built, rebuilt, furnished and equipped old and new courthouses for the entire spectrum of the State and Federal judicial system, including the Rivers State High Court, the Federal High Court, the National Industrial Court and the Court of Appeal in Port Harcourt.

Governor Wike remarked that his administration is also spending 16 billion Naira to build the Nabo Graham-Douglas, SAN Nigerian Law School campus in Port Harcourt. This is in addition to the provision of administration and maintenance overheads of N10,000,000 per month for the next four years.

The Chief Justice Of Nigeria, Hon. Justice Ibrahim Tanko Muhammad in his address charged the NBA and its members that serve in various offices in the arms of government to lead the crusade to address the poor condition of service of national judicial officers.

Justice Muhammad, who was represented by Justice Mary Odili, in his remark before declaring the NBA conference open, observed that administration of justice is being hampered by assault that litigants, especially politicians and some lawyers, launch on the judiciary when their ends are not met.

He urged the NBA to also take measures to discipline its erring members who do not only ridicule the judiciary but also abuse its processes.

Justice Muhammad noted that as Nigeria remain faced with the challenges of kidnapping, banditry, terrorism, agitations for secession and resource control, the peace of the country now rests on the balance of the scale of justice.

The Bishop of the Catholic Diocese of Sokoto, Most Rev. Dr. Matthew Hassan Kukuh, in his keynote address, said it has been difficult to review the nation’s constitution in a manner that meets the current aspirations of Nigerians because of the poor quality of those saddled with such responsibility.

According to him, any tenable constitution should be one that provides a mirror for each Nigerians to recognise him or herself as a citizen and not as an instrument that distributes favours to vested interests, sections or tribes.

Bishop Kukah wondered about the usefulness of having 120 thousand membership on NBA list that cannot be harnessed to provide the leadership that is required to save the country from the quagmire of having a workable constitution for Nigeria.

He said Nigerians suffer identity crisis because politics have been immersed in religion and making it difficult to have legal system that can address all issues and promote freedom and justice without any form of discrimination.

“Our politicians must become very careful and more circumspect. If we are going to take a lesson away from Boko Haram, from banditry, from where we find our self now, is that there is an urgent need for politicians to become more restraint in their involvement with religion. Because their religious identity remains a very troubling identity.”

Deputy Senate President, Obarisi Ovie Omo-Agege said the National Assembly has taken steps to ensure transparency of elections in Nigeria by giving nod to the electronic transmission of results.

On his part, the Speaker of the House of Representatives, Femi Gbajabiamila said the legislature is committed to ensuring that the rule of law thrives in the country.

NBA President, Olumide A. Akpata in his address explained that the 2021 conference comprise over 25 technical sessions where subject matter experts will lead conversations primarily aimed at envisaging the future of the legal profession within the context of a rapidly changing world and measures that lawyers will be required to embrace in order to remain relevant.

He expressed the profound gratitude of the NBA to the government and people of Rivers State led by Governor Wike, for their support and legendary hospitality.

Present at the conference were the Governor of Sokoto State, Rt. Hon. Aminu Waziri Tambuwal; Governor of Plateau State, Simon Lalong, former NBA presidents, Onueze O.C.J Okocha (SAN) and Okey Wali (SAN) and lawyers from the 36 states of the country.