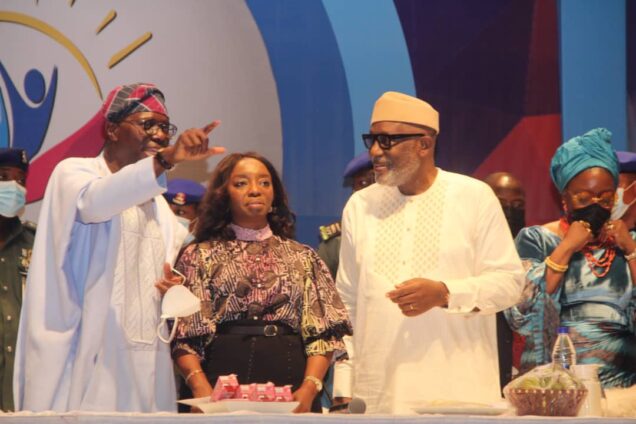 Akeredolu with Sanwo-Olu amd Dr. Ibijoke at the event

Ondo State Governor, Rotimi Akeredolu (SAN) on Tuesday said men politicians have failed the nation and that women shoul be allowed to take over.

Akeredolu was the special guest of honour at the hybrid 2021 Conference of the Committee of Wives of Lagos State Officials, COWLSO, held at the Eko Hotel and Suites, Victoria Island with the theme “Awake”.

He said there should be increased women participation in politics of the country.

According to Akeredolu, “men have never led this country properly,” emphasising men need women in order to address urgent needs of the country.

He said the history of Nigeria would not be complete without the role of women who had contributed to the progress of the country.

“The history of Nigeria is replete with heroic deeds of women. We have had women who had contributed to the progress of this country. We must continue to appreciate them. There is no reasonable society that can push women to the back seat and expect to make progress. If the country must move forward, women must lead us to progress,” he said.

He added: “I am ready to follow women, we must be ready. Women are good leaders. There is need for women who are politically conscious not to leave politics for men alone; they have never led this country properly. You must embrace politics. You must go beyond jamboree of being best political singers at rallies. You can’t be singing at political rallies, you must do something else.”

The governor urged men to work with women politically, saying that wives of political office holders should avoid using their conducts to tarnish the integrity of their husbands, adding they should influence their husbands positively in government policies.

“Don’t limit freedom of women. Being wives of political office holders is just not enough. It’s statutory to have spouses who are supportive of their husbands. It’s important this rare privileges you have is used to influence government policies. Influence your husbands for a change and benefits of the country. With insecurity at zero level, we need to look at specific ways women can Intervene to change the narratives,” he said.

Akeredolu decried that women “are enemies of themselves” and called on First Ladies to be “light to other women.”

“Wives of political political office holders must be pillar of supports. You must shun counsel of the wicked that could divide the country. You must not compromise the integrity of your husbands through your conducts,” he warned.

The Wife of the President, Aishat Buhari, who was represented by Senior Special Assistant on Administration and Women Affairs to the President, Dr. Rukayyat Gurin, urged women to use their roles for the greater benefits of the society.

“Lagos has set the pace for women. This conference demonstrates how powerful Lagos women have been in supporting their husbands. This conference would positively impart women in Lagos and Nigeria in general. I would encourage our husbands to support their wives and collectively achieve greater heights. It’s important not to forget our past. I strongly believe we have our husbands’ support. We need more assistance to move together positively,” she said.

Lagos State governor, Mr. Babajide Sanwo-Olu, emphasised the importance of women in the society, especially in the home. He urged women to be alert to their responsibilities, and not allowed themselves to be pushed to the background.

“Awake” is a clarion call to the 21st century women to become fully alert to her responsibilities as a pillar, enabler, and catalyst within the family , in the workplace, the civic space, and the larger society. It is a rallying cry to women, young and old, to be bold, assertive and fearless in the quest for a truly just, equitable and inclusive society,” he said.

According to Sanwo-Olu, “In a world where the needs and perspectives of women are often pushed to the backburner, and where violence of all kinds, physical, sexual, mental and psychological, is routinely deployed against them, the need for such a forceful wake-up call can never be over-emphasised.”

Sanwo-Olu urged men to be mindful of the manner they treat women, warning their words and actions might unconsciously hold women back “or make their journeys through life more difficult than it should be.”

The governor further said the state is already awakened, promising his administration would continue to “ensure women take their rightful position in the greater agenda that we have. He thanked COWLSO for supporting the administration especially in areas such education and health.

Chairman of COWLSO and First Lady of Lagos State, Dr. Ibijoke Sanwo-Olu urged women to stand and contribute positively to the society.

According to her, recent security challenges facing the country such as kidnapping, terrorism and banditry is a wake up call for women to prepare themselves for the future.

“It’s time to assert ourselves and contribute positively to our society. Don’t be laid back. No matter where you find yourselves, always remember that you have something to bring to the table . We all have a role to play whether you are a grandma, a career woman, house wife , an entrepreneur, a student or a farmer,” she said.

She said over the years, COWLSO had offered women the opportunity to “unlearn, learn and relearn in order to align them with modern realities and also prepare them ahead of challenges of life.”

Highlights of the opening day of the event was the presentation of 2021 Inspiration Woman Awards to some members.